Forgiveness is needed, desired, costly & required. Forgiveness requires honesty, a letting go & grace. Harming another is a sin; however, holding a grudge is sinful as well.

No, back in Genesis 4 we find the hot-head Lamech.

In verse 23 Lamech said to his wives: … I have killed a man for wounding me, a young man for striking me. 24 If Cain is avenged sevenfold, truly Lamech seventy-sevenfold.’

Jesus means to undo the rule of revenge by instituting a rule of forgiveness Now does that mean that we mosey along until we see the magic number 4900 on the moral speedometer & then rise up and smite them asunder? Forgiveness must be unlimited.

Jesus tells a parable about a servant who got upside down in debt. His boss cancelled his delinquent, un-payable debt. The same servant put a fellow in jail for a small sum. The Boss was so angry that he un-cancelled the jerk’s debt & threw him in jail.

Why, because the Master instituted the comprehenive Economy of Forgiveness by cancelling the debt of the first man. The first man didn’t “get it,” the directive here is, “go you therefore and do likewise.” He could have said, “The master has forgiven ALL that I owed him. Therefore, I cancel your debt to me out of gratitude. He could have done that without it costing him much at all. But he did not. I think it just never occurred to him and so he did what he always did, think only of himself. Jesus says in the punchline in the Parable of the Fool, “So is he who lays up treasure for himself, and is not rich toward God.” — Luke 12:16-21

On this Sunday after the anniversary of the (9/11 Attacks) I find my mind going back near half a generation to another time where the world worried about western captives in the Middle East. Those of you of a certain maturity will remember Terry Anderson, now forgotten by most, was an American journalist, held hostage in Lebanon from March 16, 1985 until December 4, 1991. What did he do for 7 years? Read, for one,

“You know, my fundamentalist, radical Shiite Muslim kidnappers went out and bought me a brand new Bible, and I kept it for six and a half years. That was very strange, but I read that, and read that, and read that. And you know, it was kind of like, what do you mean forgive your enemies? Now? How about we wait until they unchain me and stop beating on me, and then I’ll work on it, you know. But it doesn’t work that way. … I am a Christian, and I am required to forgive as a part of the bargain, as a part of the contract.” 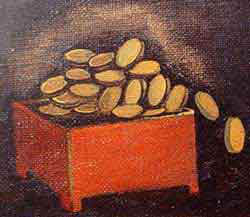 It is part of the contract, but it is not an unfunded mandate. What forgiveness costs (& it is very costly at times) is only possible because of grace. The magnitude of God’s saving grace is the proper mode for forgiveness.

Any forgiveness we really give costs us to give and it comes always wrapped in the gift paper of grace. Amen. JWS+