I promised some I would download this sermon on my blog. So here it is. I recount the story of the lynching of Ell Persons on May 22, 1917 in Memphis TN.  Listen, as I recount those events and speak to the hope that is in us.

The Rev. John W. Sewell
Download Sermon »
Beloved, this must never happen again.  In the name of God the Holy One, it must not happen again.
John

“How is retirement?” “It’s going very well, strange but fine,” is my usual reply.  A common line is you look like you have really lost some weight?”  After the third time, I latched onto, what is now, a standard response, “Oh,  I am at least a thousand people lighter.” My cardiologist was thrilled that I had retired.  All the numbers speak to my body being thrilled as well.  Sleeping in on Sunday, an activity known in Alabama as “attending Bed-springs Baptist” has aroused no guilt.  We did make it to Easter Day, let the record show.

I have devoted a lot of time getting my new office up and running.  The car no longer automatically heads west from Shepherd Lane.  Now it heads East instead, which is the direction of enlightenment.  Now what?

After a very helpful pep talk from an old and valued friend, this is now my practice. Most days,  I drive to 1049 Cresthaven Road, Memphis, TN 38119 and there I go to work.  What is my work?  At present,  I’m diving deeper into Bowen Theory than I have ever done before.  The Triangle is the object of my quest.  I shall understand that little beast if God is gracious.  The Triangle is the basic molecule of relationships.  It consists of three people or two people and an issue.  Triangles are also very fluid moving such that two points are in and one is out.

But suppose, one wanted to grow oneself up, while calming oneself down?  What if one decided to take maximum responsibility for ones own self, focusing on one own functioning?  Bowen called that Differentiation or more precisely, taking up the work of  “Differentiating a Self.”  Trust me if you should truly entertain such a notion for even half a day, everyone in the primary triangles you inhabit will know.  In addition, if you should take up this “self to differ” the reaction will be progressive and predictable.

Hell hath no fury like you arouse when you fool with someone’s heirloom triangle!  Some of them have been around for eons.  Remember,  when someone leaves or dies, people are standing line to take the vacancy. 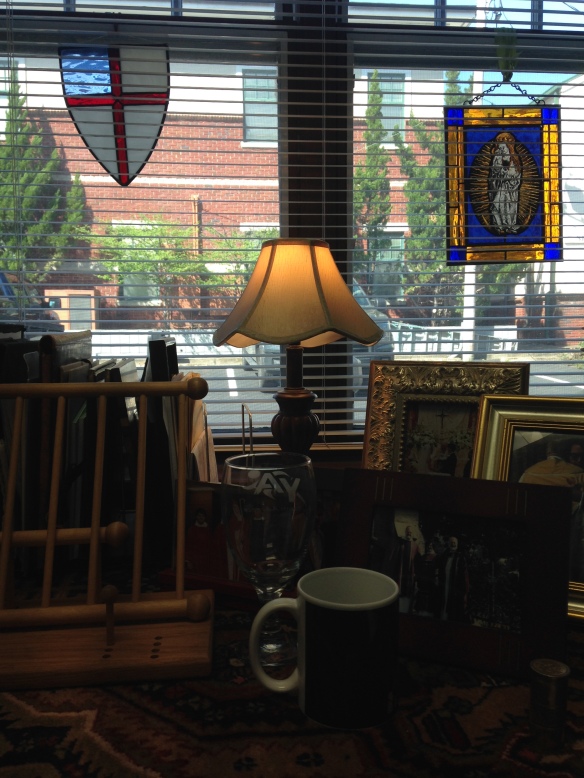 This is the view as I write, not bad.

How is retirement?  Well,  I’m lighter, but not sure what else, just now… I live in hope, in spite of the facts.

Just what state of being are we baptizing Lucy Barboro Champbliss? Just why are we doing this? Let me begin with our natural state. 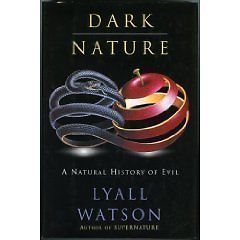 “THERE ARE SEVERAL GENETIC INSTRUCTIONS WHICH SEEM TO BE COMMON TO ALL LIFE:
• BE NASTY TO OUTSIDERS: We are afraid of strangers. We are afraid even when the newcomer has done us no harm. “Who is your family?” “Who were you before you married?” “You don’t talk like you all are from around these parts!”
• BE NICE TO INSIDERS: We are nice to those who are part of us, even when they are really trouble and difficult. Why? “Because blood is thicker than water.” “You scratch my back and I’ll scratch yours.” It is really hard to get into most human institutions if those already on the inside do not invite us in.
• CHEAT WHENEVER POSSIBLE: This is the basis of everything from card games to tax evasion. (April 15 is our national day of wailing and gnashing of teeth.) It comes naturally. We hear all sorts of reasons for cheating: “Everybody is doing it.” “I didn’t think that it really mattered?” “Do it if you can get away with it.” “It’s a matter of national security.”

As Vladimir Lenin once said, “What is mine is mine and what is yours is negotiable.”

The great Anglican liturgist, Dom Gregory Dix once wrote, “It is the heart and core of ‘the Gospel’ that something drastic has to be done about brokenness and sin, and that what I cannot do God has done.”

In today’s first reading from Acts we find ACTS 2:42 Those who had been baptized devoted themselves to the apostles’ teaching and fellowship, to the breaking of bread and the prayers. Life among the Believers 43 Awe came upon everyone, because many wonders and signs were being done by the apostles. 44 All who believed were together and had all things in common; 45 they would sell their possessions and goods and distribute the proceeds to all, as any had need. 46 Day by day, as they spent much time together in the temple, they broke bread at home and ate their food with glad and generous hearts, 47 praising God and having the goodwill of all the people. And day by day the Lord added to their number those who were being saved.

Let me point out that if this is normative for the Community of Faith, there are NO CLERGY. Yes, Apostles but then everyone is supposed to be “fully loaded and ready to move out,” which is the meaning of the Word Apostle. In a sense everyone who witnessed the ministry, passion and resurrection of Jesus was an Apostle with the Twelve having a special role in terms of message.

We have idealized this period ever since: Our baptismal creeds picks this up. What a wonderful place, wouldn’t you love to have been there? How long do you suppose it was before someone ripped the bloom off the bush? It was just about nine months, just long enough for mischief to be brought to full term.  Acts 6ff [pg. 1266 in Pew bible]

In the first century women and children depended on the income of a man in order to survive. If the husband died, then the family was in desperate straits. This being the case there is a lot widow and orphan talk in scripture. The Greek part of the community felt that their widows were discriminated against. So the dissatisfaction grew and the Greek communicants began to complain loudly, “our widows are being ignored by the Church meals on wheels.” They came and told the Apostles. The Apostles said we can’t do it all and we must be about prayer and serving the word not waiting tables or literally “Keeping Accounts”. Choose seven men of good standing, full of the Spirit and of wisdom. We’ll appoint them.” And they did. They were called Deacons, a name that comes from the word: doulos or servant. They chose Stephen, Philip, Prochorus, Nicanor, etc. Prayed, laid hands on them . . . and put them to work. Notice that the names of those chosen to be deacon were Greek names. Apparently that management technique is ancient. Put those who complain in charge of the problem. “You are empowered now go do it.”  These are the first clergy. Bishops in the earliest days were selected from the College of Deacons.

Over the first five hundred years the Church in the Roman Empire developed the model that is still dominant in the West. From the 6th Century on the Western Culture was Christian. That model continues to this day: Building – People – clergy. Clergy were put in place to act as “professional Christians” so nobody else need bother.

This is not working and it is not true. I am here to be your Coach not your surrogate nor your truant officer. I am a player coach. I’m playing because I’m baptized. I’m ordained to Coach. This is my part of the re-inventing process we call SOULWorks.

At Saint John’s we have actively and consciously for the past five years been growing ourselves up and calming ourselves down. We took surveys that told us where we are on the journey to union with Christ. We’ve developed initiatives: Bible Challenge (Bibles in Pews), Ancient Practices, SOULWorks Weekends #7 in September.

We are in transition. Going forward there will be many, many, more lay-people in active ministry than clergy. All Christians are in ministry. You will be in places I’ll not be. You have influence that I lack.

What we are called to and what we are baptizing Lucy into is un-natural in this fallen world. We are called to live above our unconscious animal nature What the Church was dealing with then and has struggled with ever since is the simple fact that being Christian runs against what comes naturally for humanity. Rising above the animal toward the Angels of our better nature is an un-natural act!

France’s Cardinal Suhard, “To be a witness is being a living mystery; it means to live in such a way that one’s life would not make sense if God did not exist.”

PALM SUNDAY MARTYRDOM IN ALEXANDRIA AT SAINT MARK’S CATHEDERAL
Twelve seconds of silence is an awkward eternity on television. Amr Adeeb, perhaps the most prominent talk show host in Egypt, leaned forward as he searched for a response. “The Copts of Egypt … are made of … steel!” he finally uttered. Moments earlier, Adeeb was watching a colleague in a simple home in Alexandria speak with the widow of Naseem Faheem, the guard at St. Mark’s Cathedral in the seaside Mediterranean city. On Palm Sunday, the guard had redirected a suicide bomber through the perimeter metal detector, where the terrorist detonated. Likely the first to die in the blast, Faheem saved the lives of dozens inside the church. “I’m not angry at the one who did this,” said his wife, children by her side. “I’m telling him, ‘May God forgive you, and we also forgive you. Believe me, we forgive you.’ “‘You put my husband in a place I couldn’t have dreamed of.’” Stunned, Adeeb stammered about Copts bearing atrocities over hundreds of years, but couldn’t escape the central scandal. “How great is this forgiveness you have!” his voice cracked. “If it were my father, I could never say this. But this is their faith and religious conviction.” Millions marveled with him across the airwaves of Egypt.

This is the un-natural life of one who is in Christ. This un-natural life of grace is ours in Christ Jesus. I am committed during these last years as your Rector to accept what is mine in Baptism so that you will do the same. What might happen in Memphis if we each become the living mystery that makes no sense without the resurrection? I’m not sure, but I’d sure like to see it, just once. Amen

An old friend from my collage days introduced me to Abbott Tryphon and his wisdom.  Check him out at his blog: http://www.morningoffering.blogspot.com/  or at his Facebook page at https://www.facebook.com/pages/All-Merciful-Saviour-Orthodox-Christian-Monastery