King of Northumbria from 634 until his death, and was venerated as a saint in the Middle Ages.

Oswald was the son of Æthelfrith of Bernicia and came to rule after spending a period in exile; after defeating the British ruler Cadwallon ap Cadfan, Oswald brought the two Northumbrian kingdoms of Bernicia and Deira once again under a single ruler, and promoted the spread of Christianity in Northumbria.

He was given a strongly positive assessment by the historian Bede, writing a little less than a century after Oswald’s death, who regarded Oswald as a saintly king; it is also Bede who is the main source for present-day historical knowledge of Oswald. After eight years of rule, in which he was the most powerful ruler in Britain, Oswald was killed in the Battle of Maserfield.    from Wikipedia 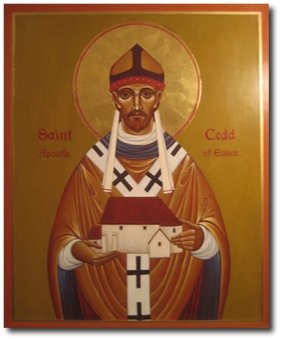 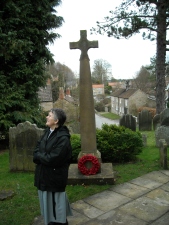 The Village of Lastingham in 2009 (my first visit to the North of England) – Cedd might well recognize the landscape. The sister is of the Order of the Holy Paraclete, whose mother house is in Whitby.

How Bishop Cedd, having a place for building a monastery given him by King Ethelwald, consecrated it to the Lord with prayer and fasting; and concerning his death. [659-664 a.d. ] The same man of God, whilst he was bishop among the East Saxons, was also wont oftentimes to visit his own province, Northumbria, for the purpose of exhortation. Oidilwald, 425 the son of King Oswald, who reigned among the Deiri, finding him a holy, wise, and good man, desired him to accept some land whereon to build a monastery, to which the king himself might frequently resort, to pray to the Lord and hear the Word, and where he might be buried when he died; for he believed faithfully that he should receive much benefit from the daily prayers of those who were to serve the Lord in that place. The king had before with him a brother of the same bishop, called Caelin, a man no less devoted to God, who, being a priest, was wont to administer to him and his house the Word and the Sacraments of the faith; by whose means he chiefly came to know and love the bishop. So then, complying with the king’s desires, the Bishop chose himself a place whereon to build a monastery among steep and distant mountains, which looked more like lurking-places for robbers and dens of wild beasts, than dwellings of men; to the end that, according [pg 186] to the prophecy of Isaiah, “In the habitation of dragons, where each lay, might be grass with reeds and rushes;” 426 that is, that the fruits of good works should spring up, where before beasts were wont to dwell, or men to live after the manner of beasts.

But the man of God, desiring first to cleanse the place which he had received for the monastery from stain of former crimes, by prayer and fasting, and so to lay the foundations there, requested of the king that he would give him opportunity and leave to abide there for prayer all the time of Lent, which was at hand. All which days, except Sundays, he prolonged his fast till the evening, according to custom, and then took no other sustenance than a small piece of bread, one hen’s egg, and a little milk and water. This, he said, was the custom of those of whom he had learned the rule of regular discipline, first to consecrate to the Lord, by prayer and fasting, the places which they had newly received for building a monastery or a church. When there were ten days of Lent still remaining, there came a messenger to call him to the king; and he, that the holy work might not be intermitted, on account of the king’s affairs, entreated his priest, Cynibill, who was also his own brother, to complete his pious undertaking. Cynibill readily consented, and when the duty of fasting and prayer was over, he there built the monastery, which is now called Laestingaeu, 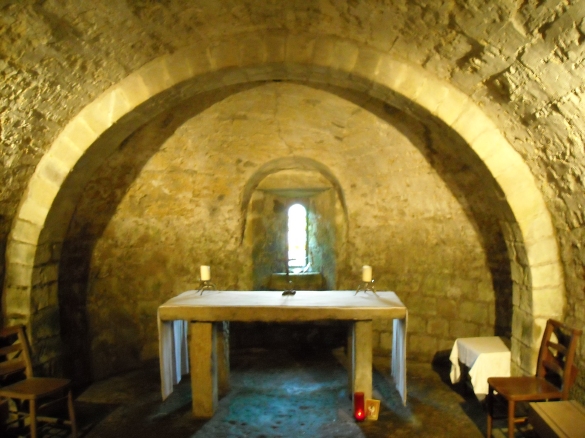 The crypt under the present Church of Saint Mary (c. 1080) is much older Saxon stonework dating from the founding by Saint Cedd and his Saint brother, Chad. Both these men were likely in this space.

427 and established therein religious customs according to the use of Lindisfarne, where he had been trained. When Cedd had for many years held the office of bishop in the aforesaid province, and also taken charge of this monastery, over which he placed provosts, 428 it happened that he came thither at a time when there was plague, and fell sick and died. He was first buried [pg 187] without the walls; but in the process of time a church was built of stone in the monastery, in honour of the Blessed Mother of God, and his body was laid in it, on the right side of the altar.

The head of the stair is the main aisle of the nave above.

The bishop left the monastery to be governed after him by his brother Ceadda, 429 who was afterwards made bishop, as shall be told hereafter. For, as it rarely happens, the four brothers we have mentioned, Cedd and Cynibill, and Caelin and Ceadda, were all celebrated priests of the Lord, and two of them also came to be bishops. When the brethren who were in his monastery, in the province of the East Saxons, 430 heard that the bishop was dead and buried in the province of the Northumbrians, about thirty men of that monastery came thither, being desirous either to live near the body of their father, if it should please God, or to die and be buried there. Being gladly received by their brethren and fellow soldiers in Christ, all of them died there struck down by the aforesaid pestilence, except one little boy, who is known to have been saved from death by the prayers of his spiritual father. For being alive long after, and giving himself to the reading of Scripture, he was told that he had not been regenerated by the water of Baptism, and being then cleansed in the laver of salvation, he was afterwards promoted to the order of priesthood, and was of service to many in the church. I do not doubt that he was delivered at the point of death, as I have said, by the intercession of his father, to whose body he had come for love of him, that so he might himself avoid eternal death, and by teaching, offer the ministry of life and salvation to others of the brethren.

The Village of Lastingham in March of 2009

Last Monday was the feast day of Saint Chad, Bishop of Litchfield. He was born in Northumbria (where Whitby is located) and he plus three brothers became priests. He was educated by the great Saint Aiden of Lindesfarne.His brother Cedd founded a monastery at a remote spot at Lastingham as described by the Venerable Bede (see below). After Cedd’s death Chad was Abbot here before becoming Bishop.

For a long time I have found the Celtic saints of the North of Britain very attractive. The more I learn the more I like them. Today Sister Pam, no small authority on these men and women, drove me out to Lastingham across the high moors. What an amazing place, austere and mysterious and covered with free range sheep.