JOHN 10:22-30 At that time the festival of the Dedication took place in Jerusalem. It was winter, and Jesus was walking in the temple, in the portico of Solomon. So the Jews gathered around him and said to him, “How long will you keep us in suspense? If you are the Messiah, tell us plainly.” Jesus answered, “I have told you, and you do not believe.

The Temple proper was not as big as one might think.  Surrounded by vast courtyards, the outer perimeter was anchored by enormous columned porticoes. While silence was deep, full and complete in innermost Holy of Holies, everywhere else there was bedlam.

Multitudes of animals were slaughtered.  Huge pipes drained the blood away. Burning carcasses gave off clouds of smoke. At the same time choirs sang psalms and canticles, while in the porticoes classes gathered. Famous Rabbis held forth. The Temple only accepted a unique currency minted in house. Foreign coins had rulers or gods engraved on them and thus were unacceptable.  The exchange rate was very lucrative as people exchanged profane money for kosher money which they promptly donated.   Jesus cleaned that out one time.  There is really nothing like it in our time. Imagine a huge barbeque, choir festival and graduate school housed at an historical site drawing tourists by the myriads of thousands: all at the same time.

Jesus walked the portico accompanied by his disciples, as did many Rabbis, lecturing as they walked. I doubt Jesus was particularly notable, among the multitude the avoiding the rain and the cold.  His opponents had no trouble finding him, demanding a straight, unambiguous answer.  Yes or no, are you Messiah or not? 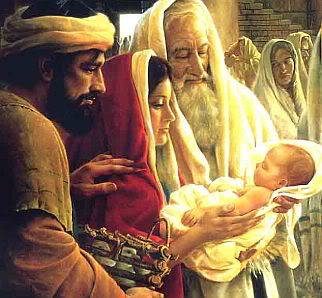 Over thirty years earlier, the ancient Simeon recognized Jesus in Mary’s arms for who he was.

Malachi 1:14b “the Lord whom you seek will suddenly come to his temple. The messenger of the covenant in whom you delight—indeed, he is coming, says the Lord of hosts.

The massive complex existed to worship the Holy One of Israel.  No one noticed Simeon greeting Messiah and no one is prepared to accept him almost thirty years later.  Why?  It didn’t fit the Messiah of their understanding.  They wanted something else, refusing in their certainty to entertain the idea that perhaps Jesus was who he said he was.

The Gospels tell us that we will meet Jesus somehow in the faces of the poor.  Not what we have in mind, but that does not change the text (Matthew 25:40).  I invite you to join Saint John’s Servants of Christ at Manna House some Thursday morning.  There you will, when you least expect it, encounter the Lord of resurrection in what Saint Teresa of Calcutta called, “one of his distressing disguises.”