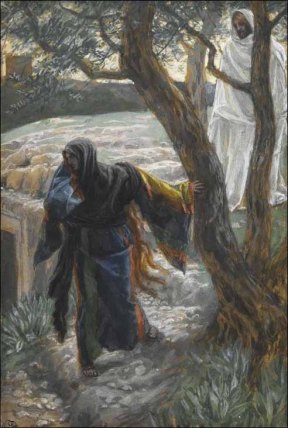 JOHN 20:11 But Mary stood weeping outside the tomb. As she wept, she bent over to look into the tomb; 12 and she saw two angels in white, sitting where the body of Jesus had been lying, one at the head and the other at the feet. 13 They said to her, “Woman, why are you weeping?” She said to them, “They have taken away my Lord, and I do not know where they have laid him.” 14 When she had said this, she turned around and saw Jesus standing there, but she did not know that it was Jesus. 15 Jesus said to her, “Woman, why are you weeping? Whom are you looking for?” Supposing him to be the gardener, she said to him, “Sir, if you have carried him away, tell me where you have laid him, and I will take him away.” 16 Jesus said to her, “Mary!” She turned and said to him in Hebrew, “Rabbouni!” (which means Teacher). 17 Jesus said to her, “Do not hold on to me, because I have not yet ascended to the Father. But go to my brothers and say to them, ‘I am ascending to my Father and your Father, to my God and your God.’ ” 18 Mary Magdalene went and announced to the disciples, “I have seen the Lord”; and she told them that he had said these things to her.

Mary was a long way from Magdala.  Jesus changed everything that day when by his simple word of power contradicted the shaming, mocking voices in her head and silenced them.  She had never heard them again.  Yes, she had come a long way.

Many people once healed will often go and live near the healer as though their healing might relapse.  Mary did travel with Jesus, mostly because she loved him.  Perhaps if he were a different man, there might have been hopes for them, but Jesus is not just any man and his work is more important than anything else.  So Mary listens, supports and loves.

View from the Cross – Tissot

She collapsed at the foot of his cross, too overcome to stand, and laid there in the dust.  Blood rolled down like tears, dripping from his feet onto her head.  She did not move.  Groans for three solid hours assailed her senses.  “Jesus said,  “It is finished,”  and it was.  The rest of the story is Mary’s story.  It is your story.  I claim it as my own.  It is never exhausted, cannot be used up.  It is the measure of the Kingdom of God available to any who accept freely without cost and without measure.

When Jesus said,   “I is finished,” he wasn’t kidding.  It was and is and ever shall be, world without end.  AMEN