The Right Reverend Michael Curry, Bishop of North Carolina holding forth in the pulpit at Saint John’s Episcopal Church, Memphis, TN. at convention 2006.  He was good then.

As The Most Reverend, Michael Curry, Presiding Bishop of the Episcopal Church, he was above splendid today at Saint George’s, Windsor UK preaching at the Celebration of the Marriage of TRH The Duke & Duchess of Sussex.  The Gospel was preached. 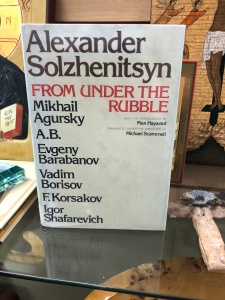 In the late 1970’s I attended a Symposium at Berea College in Berea, Kentucky.  It was titled, From Under Our Rubble, in response to a series of essays by Russian thinkers, From Under the Rubble, edited by Alexander Solzhenitsyn.  My wife and a friend, Mark Vaughn attended as the house-guests of Father Henry Parker, the Chaplain of Berea. It was a glittering assembly of thinkers.  Dr. Elton Trueblood, weighty friend of the Quakers was chaplain. The Right Reverend Stephen Neill, architect of the Church of South India preached.  The Rev. Father Ramzi Malek O.P. led prayer and taught of the soul. His brother, Charles Malek, was once President of the United Nations General Assembly.  One of the leaders of the Church of the Savior in Washington, D.C., whose name I cannot recall, spoke on ministry.  These stand out in my memory.  These men and women caught my imagination as speakers,  I knew Elton and Henry as friends.  Over forty years later,  I cannot calculate the influence they exerted on my Christian development.  I am grateful, simply grateful.  Mark and I have remained friends of soul all these decades and I am grateful beyond measure for his counsel and companionship on the way.

About thirty years ago,  I came across my first copy of From Under the Rubble in an antique mall in Birmingham AL.  I have had several copies since, usually they become gifts for others.  Among first rate essays, one of them has shaped me for the journey. It is Repentance and Self-limitation in the Life of Nations by Alexander Solzhenitsyn.  It was here that I first encountered the notion of “self-limitation.”  I rather like Rabbi Friedman’s term “self-regulation” better, but nevertheless, it was there that I began the contemplation that discovered Tzimtzum in mystical Judaism.

“After repentance, and once we renounce the use of force, self-limitation comes into its own as the most natural principle to live by. Repentance creates the atmosphere for self-limitation.” A page later he writes, “After the Western Idea of unlimited freedom, after the Marxist concept of freedom as acceptance of the yoke of necessity — here is the true Christian definition of freedom. Freedom is self-restriction! Restriction of the self for the sake of others.”

There you have it.  I have never been the same since that day.

As the author points out, “once understood and adopted, this principle diverts us – as individuals, in all forms of association, societies and nations – from outward to inward development, thereby giving us greater spiritual depth.

Faith from Under the Rubble – Uri Andreyev

I came across this painting on the internet this afternoon and its title prompted my detour through the 1970’s.  Memories are powerful, especially when they serve to keep us humble.   The day will come when people will scrap the graffiti of tribal war paint from the faces of our common humanity and discover again the face of the Son of God, hidden as always among us.

Until that day,  I live in hope, in spite of the facts.