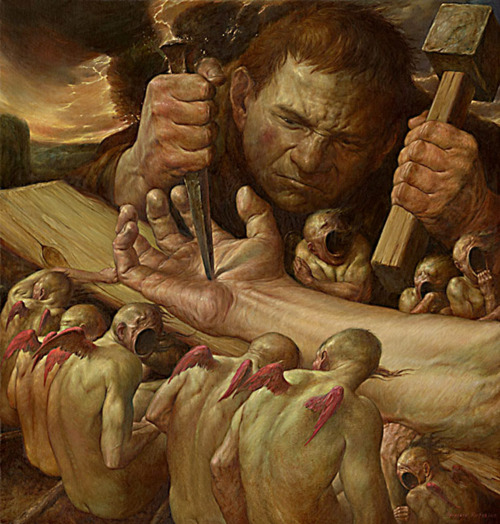 Nowhere in the New Testament is there a description of the resurrection itself. That mighty act of God was unseen and it is indescribable. When the women reach the tomb, the resurrection has already taken place. What they find is the sepulchre empty and the stone rolled away. Their first reaction is not joy but perplexity. They have come to pay their last respected and they do not know what to make of this. They fear that the body of Jesus has been stolen in an act of desecration.   No one was expecting Jesus to rise from the dead. Many Jews believed in a general resurrection at the end of history but no one expected a particular resurrection within history.  In our own day such a notion seems strange, a sort of wishful thinking, as if we are whistling in the dark to assuage our fears in the face of the universal evidence of fallibility and death.  And yet at the same time we seem convinced that if we could just get enough power, know enough and expand beyond our limitations that we can fix it ourselves.

Jake is struggling through Grand Central Station in New York City with two huge and obviously heavy suitcases when a stranger walks up to him and asks “Have you got the time?”

Jake puts down the suitcases and glances at his wrist. “It’s a quarter to six,” he says.

“Yeah, it’s not bad. Check this out” – and he shows the man a time zone display not just for every time zone in the world, but for the 86 largest cities. Jake hits a few buttons and from somewhere on the watch a voice says “The time is eleven ’til six'” in a very Texas accent. A few more buttons and the same voice says something in Japanese. Jake continues “I’ve put in regional accents for each city”.  The display is unbelievably high quality and the voice is simply astounding.

The stranger is struck dumb with admiration.

“That’s not all”, says Jake. He pushes a few more buttons and a tiny but very high-resolution map of New York City appears on the display. “The flashing dot shows our location by satellite positioning,” explains Jake.

“I want to buy this watch!” says the stranger.

“Oh, no, it’s not ready for sale yet; I’m still working out the bugs”, says the inventor.

“But look at this”, and he proceeds to demonstrate that the watch is also a very creditable little FM radio receiver with a digital tuner, a sonar device that can measure distances up to 125 meters, a pager with thermal paper printout and, most impressive of all, the capacity for voice recordings of up to 300 standard-size books, “though I only have 32 of my favorites in there so far” says Jake.

“I’ve got to have this watch!”, says the stranger.

Jake stops to think. He’s only put about $8500 into materials and development, and with $15,000 he can make another one and have it ready for merchandising in only six months.

The stranger frantically finishes writing the check and waves it in front of him.

Jake abruptly makes his decision. “OK”, he says, and peels off the watch.

The stranger takes the watch and walks away.

“Hey, wait a minute”, calls Jake after the stranger. He points to the two huge, heavy suitcases, “Don’t forget your batteries.”

For every advance there are unforeseen consequences.  In all truth humanity is unlikely to be powerful enough, know enough or become immortal on our own terms.

It is done another way in the Divine economy. John records Jesus saying, “Unless a grain of wheat falls into the earth and dies, it remains only a single grain; but if it dies it yields a rich harvest.” These words of Jesus define the paschal mystery – the mystery of faith; namely, in order to come to fuller life and spirit we must constantly be letting go of our present life.

There are also two kinds of life:

Jesus did not get his old life back. He received a new life – a richer life and one within which he would not have to die again. The mystery of faith, the paschal mystery, is about paschal death and resurrected life. The resurrection is the triumph of life over death. God is the God, not of the dead, but of the living. Therefore his Christ must be found, not among the dead, but among the living. The last word lies always with God and life.   John Polkinghorne, in Searching For Truth, Meditations on Science and Faith, writes that the resurrection of Jesus is a triple vindication.