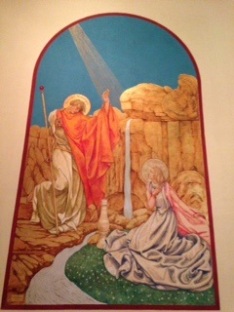 ST. LUKE 1:28.”Hail, thou that art highly favoured among women, the Lord is with thee.”

I count my time as Rector of Saint John’s as the high mark of my public ministry for a myriad of reasons and near the top is the murals by John Henry De Rosen in the church.

Under the rubric of the ancient practice: Constant Prayer, several of Saint John’s company has spent the summer reading the writings and teachings of Meister Eckhart.Today (July 31st) we listened and followed alone with the text of sermon 3.  This sermon’s text is the  greeting of the archangel Gabriel.

HERE there are three things to understand: the first, the modesty of the angel; the second, that he thought himself unworthy to accost the Mother of God; the third, that he not only addressed her, but the great multitude of souls who long after God.

I’ve never considered the event from the point of view of Gabriel.  I supposed that being one of the Four Archangels of the Quarters,  Gabriel was not starstruck by celebrity.  However,  for the first time a detail in the DeRosen annunciation mural was thrown into high psychological relief.  Always,  I have pondered the posture of the messenger. 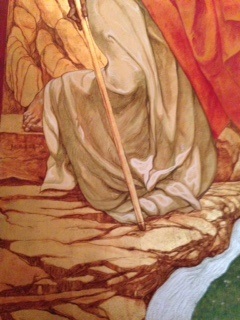 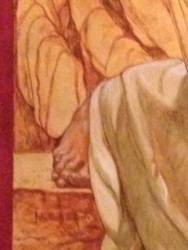 Gabriel’s body is full of tension.  Note especially his right foot, especially the great toe.  His modest diffidence is carried in this posture.  The weight of expectation and hope, perhaps.

He does not look directly at the woman before him.

I affirm that had the Virgin not first borne God spiritually He would never have been born from her in bodily fashion. A certain woman said to Christ, “Blessed is the womb that bear Thee.” To which Christ answered, “Nay, rather blessed are they that hear the Word of God and keep it.” It is more worthy of God that He be born spiritually of every pure and virgin soul, than that He be born of Mary. Hereby we should understand that humanity is, so to speak, the Son of God born from all eternity. The Father produced all creatures, and me among them, and I issued forth from Him with all creatures, and yet I abide in the Father. Just as the word which I now speak is conceived and spoken forth by me, and you all receive it, yet none the less it abides in me. Thus I and all creatures abide in the Father.

Hereto I adjoin a parable. There were a certain man and wife; the woman by accident lost an eye, and was sorely troubled thereat. Her husband then said to her, “Wife, why are you troubled? “She answered, “It is not the loss of my eye that troubles me, but the thought that you may love me less on account of that loss.” He said, “I love you all the same.” Not long after he put one of his own eyes out, and came to his wife and said, “Wife, that you may believe I love you, I have made myself like you: I, too, now, have only one eye.” So men could hardly believe that God loved them till God put one of His eyes out, that is took upon Himself human nature, and was made man. Just as fire infuses its essence and clearness into the dry wood, so has God done with man. He has created the human soul and infused His glory into it, and yet in His own essence has remained unchangeable. If you ask me whether, seeing that my spiritual birth is out of time, whether I am an eternal son, I answer “Yes,” and “No.” In the everlasting foreknowledge of God, I slumbered like a word unspoken. He hath brought me forth His son in the image of His eternal fatherhood, that I also should be a father and bring forth Him. It is as if one stood before a high mountain, and cried, “Art thou there?” The echo comes back, “Art thou there?” If one cries, “Come out.” the echo answers, “Come out.”

Again: If I am in a higher place and say to someone, “Come up hither,” that might be difficult for him. But if I say, “Sit down,” that would be easy. Thus God dealeth with us. When man humbles himself, God cannot restrain His mercy; He must come down and pour His grace into the humble man, and He gives Himself most of all, and all at once, to the least of all. It is essential to God to give, for His essence is His goodness and His goodness is His love. Love is the root of all joy and sorrow. Slavish fear of God is to be put away. The right fear is the fear of losing God. If the earth flee downward from heaven, it finds heaven beneath it; if it flee upward, it comes again to heaven. The earth cannot flee from heaven: whether it flee up or down, the heaven rains its influence upon it, and stamps its impress upon it, and makes it fruitful, whether it be willing or not. Thus doth God with men: whoever thinketh to escape Him, flies into His bosom, for every corner is open to Him. God brings forth His Son in thee, whether thou likest it or not, whether thou sleepest or wakest; God worketh His own will. That man is unaware of it, is man’s fault, for his taste is so spoilt by feeding on earthly things that he cannot relish God’s love. If we had love to God, we should relish God, and all His works; we should receive all things from God, and work the same works as He worketh.

God created the soul after the image of His highest perfection. He issued forth from the treasure-house of the everlasting Fatherhood in which He had rested from all eternity. Then the Son opened the tent of His everlasting glory and came forth from His high place to fetch His Bride, whom the Father had espoused to Him from all Eternity, back to that heaven from which she came. Therefore He came forth rejoicing as a bridegroom and suffered the pangs of love. Then He returned to His secret chamber in the silence and stillness of the everlasting Fatherhood. As He came forth from the Highest, so He returned to the Highest with His Bride, and revealed to her the hidden treasures of His Godhead.

The first beginning is for the sake of the last end. God Himself doth not rest because He is the beginning, but because He is the end and goal of all creation. This end is concealed in the darkness of the everlasting Godhead, and is unknown, and never was known, and never will be known. God Himself remains unknown; the light of the everlasting Father shineth in darkness, and the darkness comprehended it not. May the truth of which we have spoken lead us to the truth. Amen.