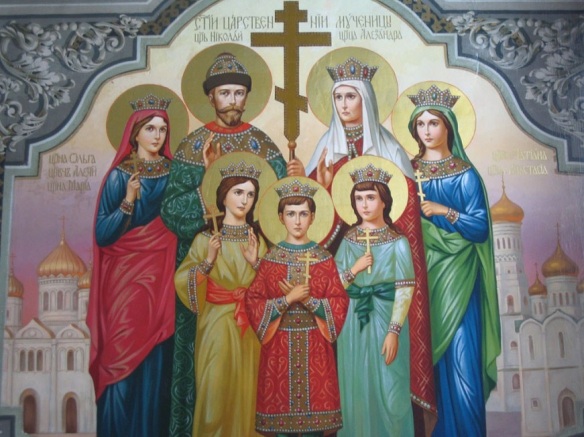 On this day,   July 17, 1918,  The last Russian Tsar, his family and servants were murdered by the Bolsheviks. On this 98th anniversary,  let us pray for all who suffer on account of their faith and simply because of who they are.

Alexander Petrovich Izvolsky, the Minister of Foreign Affairs from 1906 to 1910, wrote the following in his reflections about the armed revolt that broke out on the night of July 19-20, 1906, in Kronstadt:”…On that day, July 20, when the mutiny had reached its culminating point, I was by the Emperor in Peterhof… The line of reinforcements could be seen from the window… We clearly heard the sound of the canons… I could not detect the slightest sign of agitation in his features… After the briefing the Emperor said: If you see me in such a calm state, this is because I have an unshakable faith that the fate of Russia, my own fate and the fate of my family are in the Lord’s hands. No matter what happens, I will bow before His will.”    (Orthodox Russia, 1967, no. 10, p. 4)

There were many signs, portents, and prophecies of the Imperial martyrdom to come.

(Anna Alexandrovna Vyrubova, Her Majesty’s Lady-in-Waiting, p. 171) -“In December of 1916, Her Majesty [Empress Alexandra] traveled for an emotional rest to Novgorod for a day, with two Grand Duchesses and a small suite. She visited field hospitals and monasteries and attended the Liturgy at the St. Sophia Cathedral. Before her departure the Tsaritsa visited the Yurievsky and Desyarina Monasteries. In the latter she visited Eldress Maria Mikhailovna in her tiny cell, where the aged woman had lain for many years in heavy chains on an iron bed. When the Tsaritsa entered, the Eldress held her withered hand out to her and said, ‘Here comes the martyr, Tsaritsa Alexandra!’ She embraced her and blessed her. In a few days the Eldress reposed.”

There was no tsar in whose reign more saints were glorified (canonized) than that of Nicholas. His love of Orthodoxy and the Church’s holy ones knew no bounds; and he himself often pressured the Holy Synod to speedily accord fitting reverence to many of God’s saints. Among those glorified during his reign were: St. Theodosius of Chernigov (glorified in 1896), St. Isidore Yurievsky (1897), St. Euphrosyne of Polotsk (1909), St. Anna of Kashin (1910), St. Ioasaph of Belgorod (1911), St. Germogen (Hermogenes) of Moscow (1913), St. Pitirim of Tambov (1914), St. John (Maximovich) of Tobolsk (1916), St. Paul of Tobolsk (1917) and St. Sophrony of Irkutsk (1918). In addition, one of the most revered of Russia’s saints, Seraphim of Sarov, was glorified by the Church during the reign of this pious Tsar in 1903, at his insistence. At this time, Nicholas was made aware of the future apostasy and downfall of the Russian nation and Church through a prophetic letter written by St. Seraphim himself. The Saint had, shortly before his death in 1833, written this letter and addressed it “to the Tsar in whose reign I shall be glorified.” He then gave it to Elena Motovilov, the young wife of N. I. Motovilov, who is now well known for recording his conversation with the Saint about the acquisition of the Holy Spirit. She kept that letter for seventy years and gave it to the Tsar at the glorification ceremony. 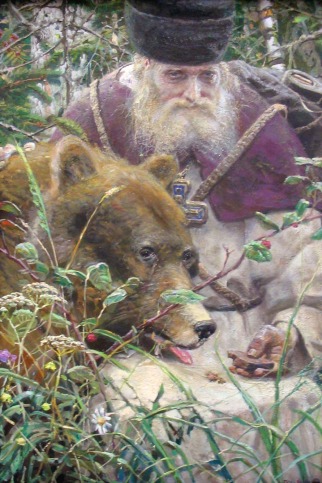 While the exact contents are today unknown, it is nevertheless certain that St. Seraphim prepared Nicholas for the coming tribulations. Furthermore, on the return trip from Sarov, the Royal Family visited St. Seraphim’s Diveyevo Convent where Blessed Pasha (Parasceva) the Fool-for-Christ spoke to them for several hours; it is said that she foretold to them their own martyrdom as well as that of Holy Russia. They left her cell pale and shaken but resolute — they would accept with faith whatever Cod had prepared for them, esteeming the incorruptible crown of martyrdom higher than corruptible earthly crowns; electing to accept the cup of suffering offered to them by God Almighty, that by drinking of it they might offer themselves up as a sacrifice for their people.

Holy Martyrs pray for us