Those with a death wish have an advantage over those who have a life.

The term “True Believer” is a common expression in American speech.  What most people do not reaize is that the turm comes from a book of that titile.  Eric Hoffer published this study of the nature of mass movements in 1951 (the year of my birth). 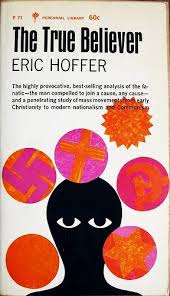 Given the rise of increasingly violent groups fueled by pathological ideology, Hoffer tells us that the content of the ideology is less important than the process of fanaticism.  This is a distinction that we really must learn.  It is not really about Islam, though the ideology in this case is Islamic. ISIS’s fighters, having sucumbed to ideology do not fear death. Actually dying is martyrdom for these young men.  Their opponents fight to protect their families.  Those with a death wish have an advantage over those who have a life. Thus in the short run evil has an edge.  In time, God willing, the rest of us will rise up and put an end to this most recent eruption of a chronic infection of a will to power.

Fundamentalism longs for a golden age that in fact never existed. Deep belief in fantasy promotes delusian. Delusion demands not faith, but rather a kind of “sccumbing” that produces fanatics.  I also recommend Carl Jung’s insights in the last chapter of his book,  Memories, Dreams and Reflections, where he lays out the dangers of succumbing to or being addicted to anything.

I highly recomend Eric Hoffer’s classic and  the insights of Carl Jung on fanaticsim.