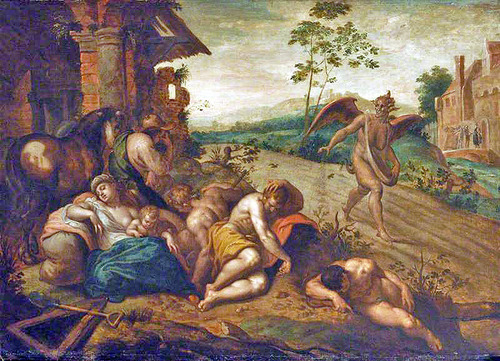 The Gospel lessons for last Sunday, today and next Sunday are sequential parables of the Kingdom recorded by Matthew. Last Sunday we looked at the Parable of the Sower. The Word (the seed) has in it the power which brings the Kingdom. The Kingdom is not dependent on us. All we can do is respond. That is our contribution. The greatest yield per acre of soul comes to those who interfere with the word the LEAST! Next Sunday we will look at a grouping of little parables: the mustard seed, yeast hidden in flour, the treasure hidden in the field, the pearl merchant and the fish net.

Today we chew on the parable of the Tares/Weeds. A man sowed good seed in his field and while everyone slept an enemy came and sowed weeds in the field. So the wheat and weeds came up together.

What the enemy sowed among the wheat was ziziania weeds, tares — specifically darnel, Lolium te-mu-len-tum, an annual grass that, with it’s long, slender awns, or bristles, looks very much like wheat. The weeds do not effect the wheat. It is clear from the story the weeds will not effect the fruitfulness of the wheat. It is not the danger to the crop, but the inconvenience to the farmer and his servants that is the issue. The servants, who will have to do the work, naturally enough, have the most intense feelings about the inconvenience. They want to immediately rip up the weeds. The farmer, though, is able to see the big scheme and has in mind another strategy: “wait, until harvest.”

As Robert Farrar Capon says, “. . . the parable says that doing nothing is, for the time being, the preferred response to evil. It insists that the mysterious, paradoxical tactic of noninterference is the only one that can be effective in the time frame within which the servants are working. Not matter that they may have plausible proposals for dealing with the menace as they see it; their very proposals, the farmer tells them, are more of a menace than anything else. To be sure, he goes on the assure them that at some later, riper time, he will indeed interfere to a fare-thee-well with his enemy’s plans.”

Jesus then explains the meaning of the parts. In this story of the Kingdom we find what all Christians know: we live in the in-between-time of already and not yet. The Kingdom has begun but the full impact of God’s reign is not yet realized. What do we do with this injunction of let the weeds and wheat grow together?

Here we encounter a deep truth of Jesus; the sort of truth which runs counter to everything we instinctively believe. It’s like the instinctive response that I had the first time I drove a car on ice and it skidded. “You know, grab the wheel and steer!” That strategy will put you in the ditch in a hurry. You have to learn to go against your first impulse and let go of the wheel. Often the car will right itself. Or in other words, our first instinct is to say, “Don’t just stand there do something!!!” But what might really be called for is what Murray Bowen used to say, “Don’t just do something stand there!!!!”

The same sort of process goes on in the Spiritual life, particularly when it comes to power. I think it was Martin Luther who coined the expression “Left handed VRS Right handed power”. Right handed power is the power of force.

I borrow again from the Parables of the Kingdom, by Robert Farrar Capon. [p. 18]

“Direct, straight-line, intervening power does, of course have many uses. With it, you can lift the spaghetti from the plate to your mouth, wipe the sauce off your slacks, carry to them to the dry cleaners, and perhaps make enough money to ransom them back. Indeed, straight-line power (“use the force you need to get the result you want”) is responsible for almost everything that happens in the world. And the beauty of it is, it works. From removing, the dust with a cloth to removing your enemy with a .45, it achieves its ends in sensible, effective, easily understood ways.

Unfortunately, it has a whopping limitation. If you take the view that one of the chief objects in life is to remain in loving relationships with other people, straight-line power becomes useless. Oh, admittedly you can snatch your baby boy away from the edge of a cliff and not have a broken relationship on your hands. But just try interfering with his plans for the season when he is twenty, and see what happens, especially if his chosen plans play havoc with your own. Suppose he makes unauthorized use of your car, and you use a little straight-line verbal power to scare him out of doing it again. Well and good. But suppose further that he does it again anyway – and again and again and again. What do you do best if you are committed to straight-line power? You raise your voice a little more nastily each time till you can’t shout any louder. And then you beat him (if you are stronger than he is) until you can’t beat any harder. Then you chain him to a radiator till. . . . But you see the point. At some very early crux in that difficult, personal relationship, the whole thing will be destroyed unless you — who, on any reasonable view, should be allowed to use straight-line power — simply refuse to use it; unless, in other words, you decide that instead of dishing out justifiable pain and punishment, you are willing, quite foolishly, to take a beating yourself.

But such a paradoxical exercise of power, please note, is a hundred and eighty degrees away from the straight-line variety. It is, to introduce a phrase from Luther, left-handed power. Unlike the power of the right hand (which, interestingly enough, is governed by the logical, plausibility-loving left hemisphere of the brain), left-handed power is guided by the more intuitive, open and imaginative right side of the brain.

Left-handed power, in other words, is precisely paradoxical power: power that looks for all the world like weakness, intervention that seems indistinguishable from nonintervention. More than that, it is guaranteed to stop no determined evildoers whatsoever. It might, of course, touch and soften their hearts. but then again, it might not. It certainly didn’t for Jesus; and if you decide to use it, you should be quite clear that it probably won’t for you either.
The only thing it does insure is that you will not — even after your chin has been bashed in — have make the mistake of closing any interpersonal doors from your side.”

I believe that is why Jesus instructs us “not to resist evil” or in other words to become what we are opposing. I suspect that is why God does not seem to be “intervening” in human affairs. His ways or not our ways. 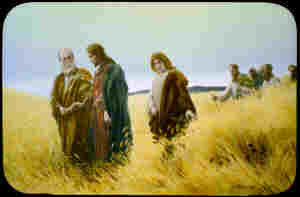 I quote from, The Parables of Jesus, Studies in the Synoptic Gospels by Herman Hendrickx (p. 72f.)

“Our natural tendency is to identify with the master’s servants. Do they not wish to be of service to their Lord by offering to weed out the tares? For what they see in the heat is the tares. But they have lost sight of everything else; they are forgetting about the wheat shooting up among the tares. As they see it, the tares are the stronger of the two plants. . . . If they leave them alone, they will get the upper hand and choke the good wheat. The are afraid; they want to act speedily and ruthlessly: weed out those tares. in so doing, they attach less importance to their master than to the enemy. In their eyes, the enemy is stronger; what he has sown will ultimately get the upper hand; perhaps there will be no harvest at all.

But, unconsciously, they are thus siding with the enemy and acting like him: they are against him in much the same way as he is against their Master; they are attacking the tares, just as the enemy attacked the wheat. . . Therefore they are making themselves dependent on the enemy and going away from the master: ’Do you want us to go off and weed them out?’ At the heart of the parable, Are we advised to let things alone, to be free and easy? Are we dispensed from sturdy action in the world? Of course not. The parable digs deeper: it gets down to the heart of things, to our innermost being whence spring our actions and our involvement: faith or fear? Faith or the desire to be all-powerful? All depends on the way we look at the world, that field where the good wheat and the tares are intermingled. Do we regard it as the property of Another, who sows life and whose servants we are? OR do we consider ourselves to be solely responsible for our history, for History?

There is great anxiety in the culture as we face emerging issues of our day. What do we do? Do we live in faith or fear? As Jesus said, “In the world you face persecution. But take courage; I have conquered the world!”

Relax, we are not ultimately responsible, because we are not God. We become willful and anxious when we begin to think we have to be God. God is all knowing, all powerful, and without limit. We are not all knowing, all powerful, and we are limited. When we become willful we are motivated by anxiety and fear, not faith!!! We are called to be faithful, not willing people to be different than they are and then using a little body English and straight line power on them if they don’t change to suit us.

Some things just can’t be willed.

You can not will love. It just doesn’t work that way.
You cannot will hate either. That’s what the cross teaches us.

God calls us to grow up and mature. Maturity is the most important issue in life: taking personal responsibility for our own emotional being and destiny. Our part of the in-between-time dance is to love God, and proclaim God’s love to each other and creation. We are not called to weed control. The wheat and the weeds grow together and we can’t tell the difference yet. A weed may turn out to be wheat and what we thought was wheat may not be after all.

We are called to live and love in that tension.  It is a tension of grace!!  Amen.