Epic of Eden: A Christian Entry into the Old Testament – Doctor Richter – thank you for coming and leading us out of the Wilderness of the Pentateuch!

The light that shown in the Darkness at Christmas is revealed to the world,  [Epiphany]

MATTHEW 3:15    But Jesus answered him;  “Let it be so now; for it is proper for us in this way to fulfill all righteousness.” Then he consented. 16 And when Jesus had been baptized, just as he came up from the water, suddenly the heavens were opened to him and he saw the Spirit of God descending like a dove and alighting on him. 17 And a voice from heaven said, “This is my Son, the Beloved, with whom I am well pleased.”

Type in Old Testament is restated in the New Testament with great intensity & clarity.

When God remembered Noah… A Dove was the sign for Noah and the Ark, Comes up out of the water of the Jordan –

Origen, (late 2nd Century) “Christ was baptized for our sake, in order to sanctify the waters.  A Dove descended as in the case of Noah’s Ark, announcing God’s mercy to the world and at the same time making clear what is spiritual should be meek and without guile.”  Fragment 56

The baptism of Jesus is a great example of the rarest notion, so unique, frankly so bizarre that it continues to cause a scandal even today, namely, the Humility of Divinity.  God need not prove anything by glory he has plenty of that all ready.  At the very heart of God is humility.  Jesus didn’t hang to his glory but emptied himself taking on the form of a servant- obedient to death, even death on a cross.

“Let it be so now; for it is proper for us in this way to fulfill all righteousness.”  To fill all Righteousness full of divine content.   The Prayer over the Water – Coming of Egypt – Baptism – WE experience this every way you can think except drink it.

Today we come to have the babies done as the Brits put it. 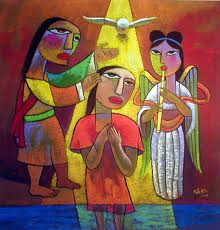 Most of you know that I was on sabbatical from August to December last year.  I spent six weeks in York, England (my favorite city).  I need to tell you two baptism stories from September but first a bit of back story.

Were Saint John’s congregation plopped down in the North of Britain this morning, we would be one of  the 2 largest Anglican Parishes in Northern half of the country.  Churches are everywhere.  I stood on a street and could see four Anglican churches within two blocks.  By the Middle Ages, York has 45 Churches inside the walls. 25 have been demolished and many have been put to other uses.

Saint Sampson’s  is a senior citizen center [for people over 60]; Saint Michaels is a restaurant where the waiters are also counselors.Saint Mary’s on the Pavement  is an art Museum; Saint Saviour’s is an archeological museum.

Unfortunately, I am sorry to report this morning that Saint John’s is now a bar and club called “The Parish.”  It occurred to me that it would be useful for someone to tell their spouse that they needed to go to a meeting at the parish after work, but I digress.  The nave is a dance floor, the sanctuary the bar and the dance poles, I hope were late installations.  The congregations of the surviving churches are faithful, very welcoming and very few in number.

Since our mother church is the State Church of England, everyone in the parish boundaries have the right to the services and sacraments of the Church.  The people that spoke with me were, largely, not hostile to the faith, they didn’t know enough to be hostile. Before you say, “but that’s Europe where nobody goes to church,” while I admittedly ran no “scientific “poll, however a pattern did emerge; what I saw was chilling, only adding to my sense of dis-ease.  What I found here in York is where we headed; now to my stories.

Tim Jones, a priest friend of mine with a parish in York told me a story that is illustrative of the future. He was called on to baptize an infant whose parents were unmarried. There was a time when such conditions would have been resolved by a “shotgun” wedding. Those days are long past so a child with unwed parents not uncommon at all. My friend upon arriving sees the couple with a bundle, no a “bale” of lace, ribbons and fabric froth that it was hard to tell if it was their off-spring or not.

It turned out that the baby was enveloped in christening gowns from three different lines of their families. The parents were, delighted to live out these traditions. Then they said to my buddy, “you know we really wanted to have this done according to tradition. But we learned as we started planning this that according to tradition we were supposed to be married first!” They had no idea at all that couples were married   before children.  This is where we are headed in the culture of the West.

This is our future. The hostility toward Christianity has passed in Britain. The folk I met were largely not hostile; they simply didn’t know anything about it. Now, the good news is at least some of them, are open. The bad news is that we are totally unprepared to do what is needed. What is called required has not been called for since Saint Aidan left Iona for Northumbria.

September 8, was Bible Challenge Pledge Sunday.  Over 250 signed a pledge card to read the Bible in some way.  80 of you pledged to read the whole thing from cover to cover.  Bible in the pews: that has caused a bit of talk.  Do you know they have put Bibles in the pews at Saint John’s.  Do you know, beloved, in Memphis Tennessee we are being accused of being Christian!

That same  Sunday I was in York walked across town on the ancient walls and attended Eucharist at Holy Trinity Priory an ancient monastic church where people has prayed for at least 1000 years. By late afternoon as I walked back toward the Minster I passed Saint Martin’s shrine. The present Saint Martin’s church is a side aisle of the original church bombed during WWII. It is a shrine for piece as well as a memorial to those who died. I had spent time there four years ago so I almost passed on, but that little something encouraged me to stop. I stopped.

Opening the door I walked into a Chinese baptism. Let me quickly add that I am not joking and that it bears no resemblance to a Chinese fire-drill. In front of me was a lattice work eight by four feet structure lined with a blue tarpaulin. A garden hose snaked from a second floor window down into the rigged baptistery.   An elderly woman was pouring boiling water from a tea kettle into the slowly filling pool.  She turned, smiled and asked, “Are you here for the baptism?”  I explained who I was and that I just happened by.  “You are most welcome to stay.”  She went on to explain that a Chinese Australian had come to Britain as a missionary to the Chinese.

As as aside, there are many many Chinese folk in York, students and otherwise. Most of them had never heard of Jesus until coming to the North of England.  A Chinese language faith community meets in one of the Anglican Churches in the Centre City.  Five adults were baptized that afternoon.  The candidates were asked tell why they wanted to be baptized. A young man spoke first and said that he had never heard of Jesus until he came to York.  He met Christians and by the quality of their lives was attracted to the faith.  He intended to live his life for Christ and to order his  affairs in such a way that people would know by the quality of his life that the Good News of God in Christ lives to those he meets for the rest of his life.

Now see with me what I saw that evening in York, the ancient Eboracum. I am in the nave of Church of England church begun in 1000, named for 4th Century French: Saint Martin, bombed by the Germans – at a baptism of Chinese adults evangelized by an Australian Chinese missionary and baptized by an Anglo Anglican priest – had the Kingdom come near me?  Yes it had.

The Chinese who have never heard of Jesus are more susceptible to Good News than those who have heard it, or think they have heard it.   I want to paraphrase a powerful metaphor from the great Methodist missionary, E. Stanley Jones, who said, “We have inoculated   America with such a harmless strain of Christianity that people are immune to the full strain.”  Following that metaphor …

Which leads me to ask me and you the question,  “If we do not contract a lethal strain of Christianity, how can we die to self as The Holy Spirit penetrates our history and existence?”

That being the case, beloved, if we, you and I do not get up from breaking bread and be bread… If we have been fed and refuse to be bread, For God’s sake who will? 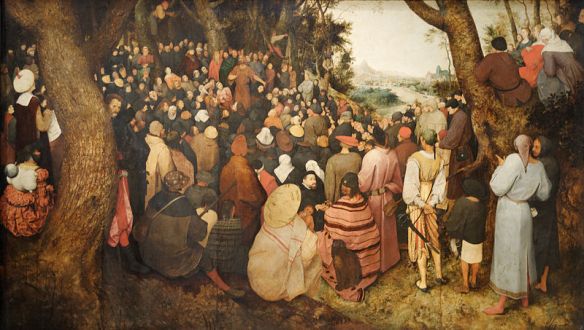 Are you sure that this is what you want to do?   I mean you never know what it might lead to:

Jeffrey & Taylor just might continue in the apostle’s teaching and fellowship, in the breaking of bread and in the prayers.

And if that isn’t scary enough, what if they resist evil and keeps on doing it even when it makes people hostile?

What if these children you present proclaim the Good News of God in Christ by what they say and do?

What if they take the Good News so seriously that they discern Christ is everyone they meet and serve them to the best of their ability and love others as much as they love themselves?

What if she began to strive for justice and peace – and he respects the dignity of all even those with whom he could not agree?

Could we, the community of faith tolerate these two people when they begin to take seriously what we say we believe?