Christ of the Homeless – Fritz Eichenberg

I want to tell you a story I heard this week.  It happened in one of the Episcopal parishes in Memphis last Sunday.  The clergy and staff were busy preparing for the service when a man came in from the cold.  A staff person saw him and introduced himself. The man’s hands were rigid, clammy cold.  He was welcomed in given coffee and a place to warm himself.

Later the Rector learned the back story.  The man had tried to get the Union Mission but they were dangerously full.  He could find no place to be so he walked through that night because to stop, rest, perchance to sleep, was deadly in 22 degree weather. By morning he had walked a long way and happened upon that parish. 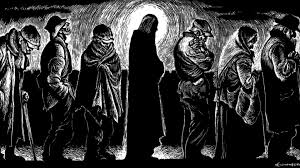 Everyone gathered themselves for church and one of the clergy invited the man to church and he came, sitting near the front behind a parish family.  They invited him to communion and he went.  The service ended as Episcopal Eucharist does with the congregation dispatched to do ministry in the name of the Lord. As everyone in Church busied themselves preparing to go off to lunch as folk in Memphis have done for generations, the man from the pew in front of the guest asked if he had a coat. “No.”  He took off his own overcoat and put it on him.

And the Kingdom came near that parish that morning.  And that parish, beloved was this parish, your parish, Saint John’s.

I was listening to Bishop NT Wright a few days ago as I walked in my neighborhood.  He spoke directly to me about these men when he spoke of the empowering nature of the Eucharist, giving those that receive it the energy to become the occasion where Jesus’ incarnation breaks out again.”  The moment that coat left its owners back and was slipped on the man Jesus was in-fleshed again – We know what Jesus would have done if he had been there because he WAS there!

While I was in York, I heard Dr. Anthony Campolo lecture in the choir of York Minster.

Britain is in a national debate about these very concerns.  Dr. Campolo launched his lecture from Genesis 4: 9 Then the LORD said to Cain, “Where is your brother Abel?” He said, “I do not know; am I my brother’s keeper?”

People rather love quoting Cain.  It distances them from any genuine connection.  Even in the Church we rather like to quote Cain, of all things?  That being as it may, the real answer Dr. Campolo announced is, “You are not your brother’s keeper.  You are your brother’s brother!”

That is my very theological point about the encounters in the film and in Saint John’s nave.  It is one thing to give, even vast sums of money, from a safe distance and from a higher position.  A story from my years in Mississippi is illustrative.  The Stew Pot was inter-faith soup kitchen in Jackson.  People from lots of religious communities had volunteers who went to serve food at the daily noon meal.  That was all well and good until a new director was appointed.  He decreed that food would no longer be served at the counter but that the volunteers would serve the homeless at their table and then when they had waited their table sit and eat with the people they served.  I don’t need to report the sad fact that when people had to come from behind the safety of the counter, serve as waiters and then break bread with the same people  …. they were never seen again.

E. Stanley Jones, a Methodist Missionary to India, was a great friend of Mahatma Gandhi.  He once asked Gandhi what Christians should do? Jones then writes the following: “The greatest living non-Christian (Gandhi) asks us not to adulterate it or tone it down, not to meet them with an emasculated gospel, but to take it in its rugged simplicity and high demand. But what are we doing? As someone has suggested, we are inoculating the world with a mild form of Christianity, so that it is now practically immune against the real thing.” (E. Stanley Jones, The Christ of the Indian Road, “The Great Hindrance.)

Which leads me to ask me and you the question: If we do not contract a lethal strain of Christianity, how can we die to self as The Holy Spirit penetrates our history and existence…

If we, you and I do not get up from breaking bread and be bread… If we have been fed and refuse to be bread, For God’s sake who will?

That is why when I began to hear from a great distance the new life that was springing up among you as you read the scriptures, how Bible studies were organized not from the corner of Greer and Central but in offices and businesses and homes.  When I heard how new energy infused Sunday School as the daily feeding quickened the life force of faith within you, I gave thanks. 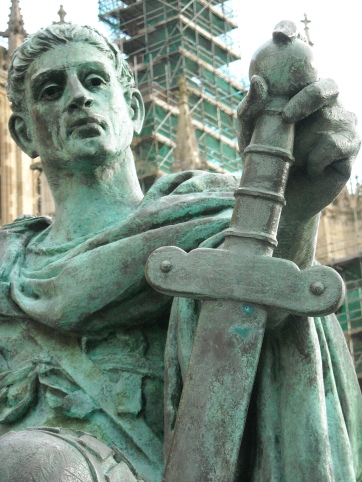 As I wandered the streets of York, knelt in Churches where human knees have bent for a 1000 years I prayed for you.  I stood near the spot that Constantine was proclaimed Emperor and went from that spot to relieve the Church from persecution and there I prayed, I asked the Almighty to give us vision for the freeing of the souls of Memphians from poverty and despair.  As I sat in the Quire of the Great Cathedral of Saint Peter, the Prince of Apostles,  who failed Jesus yet followed him anyway, and  listened to the choir chant ancient Psalms there I asked God to give us strength for the living of  these days.

Now that I am among you again, I see that the rumors of your quickening faith are not exaggerated and I give thanks.

What is the way forward?  Please join with me in praying. The renewal team continues to meet,  your staff and vestry pray and will take counsel together in the days ahead.  What I ask of you is that you consider adding the ancient practices into the living of rhythm of your days. Some physicians among us will coach us as we take up fasting.  We will offer this before Lent.  There are valid ways of anyone to fast. Resources, companions and a map will be provided anyone who will.  That is all required.  The Renewal Works process will continue as a way of life here.

Before I close, let me speak to you who signed a card in September and now find yourself wandering with the Children of Israel somewhere in the Wilderness of Numbers or Leviticus,  if you have read a sentence more scripture than you would have done otherwise that is good news.  My philosophy is that anything worth doing is worth doing poorly. So take up you Bible and read.  This is not a sprint it is a long distance.  No one will be left behind. We are in this together.

To Him be glory, now and forever. Amen. 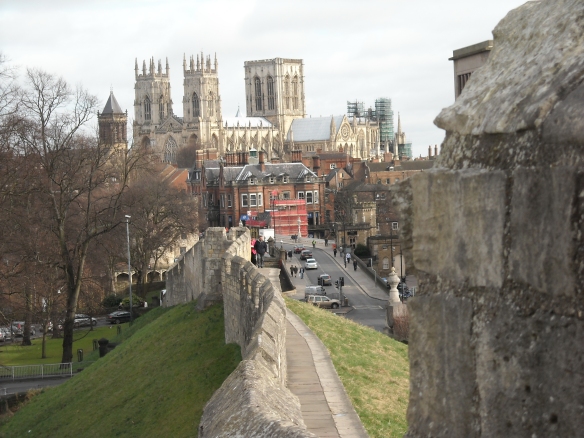 York Minster, view from the city walls across the River Ouse 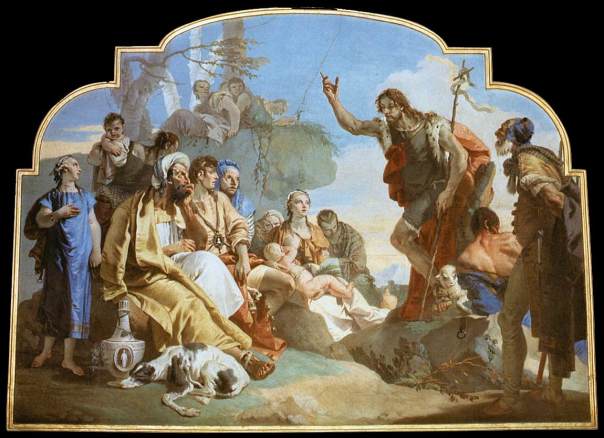 John the Baptizer is a prime example of the words Flannery O’Connor when she said, “You shall know the truth and the truth shall make you ODD!”  He came in from the wilderness, wearing camel hair and eating locusts and wild honey, preaching hell fire every time proclaiming a baptism for repentance,

Publicly calling down Herod Antipas for marrying his niece who happened to be married to his brother got him in jail.   They were close those Herods.  Cooling his heels in jail – he begins, first to wonder and then to ponder and then to fret.  Then he sends disciples to Jesus asking the question, really on behalf of everyone of us who have ever encountered Jesus.

John the Baptizer, “Are you the one, or should we wait for another?

Tell John what you hear and see:  the blind receive their sight, the lame walk, the lepers are cleansed, the deaf hear, the dead are raised, and the poor good news brought to them.

Brian McClaren in his book, Finding Our Way Again: The Return of the Ancient Practices, 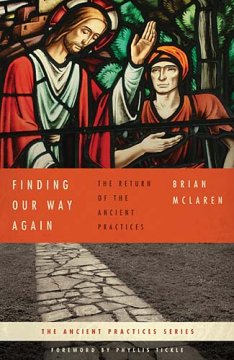 tells the story of being the moderator a question and answer period at lecture. In response to a question the Speaker said that he had asked the manger of a book store what were the bestselling book categories.  He reported that the bestselling books were about how to get rich.  The second best category was religion/spirituality.  Then the man asked Brian, “Why do you suppose that books on Buddhism sell better than books on Christianity.  Not knowing what to say Brian asked the speaker what he thought and the man said, “It‘s because Buddhism is a way of life and Christianity is a set of beliefs.”  That’s it. That’s the issue.

Listen carefully = this is the very reason for Renewal Works. This is the reason for Saint John’s Reads.  Let me see if I can describe the dilemma as I see it.

The enlightenment so elevated the thinking function until we are barely able to consider any other way of dealing with reality.  We have come to think that thinking is all there is.  For whatever happens we work to find the right way to think about it. We do studies, statistics, trends and demographics.   We come up with the word formula and the words are the thing.  And that is not true.

Let me use an example from American culture.

I believe in George Washington.

These are a set of beliefs but they have nothing to do with how I live my life on Tuesday or any other day.  Even if:

Richard Rohr –  not Orthodoxy, right belief, we have more of that than we know what to do with so now we fight about the word formulas to the confusion, consternation and then cold feet of our people as they quietly find the exits because affirming facts and data of belief will not stop the slow leak in their souls.Richard goes on to say that what we need is Orthopraxy – Right Practice.  The enlightenment produced extraordinary intellect and technology while discounting and forgetting the practices that formed our ancestors in the faith.

How many of you have noticed that by reading the Bible most every day something shifted in you? The stories came to mind.  You begin to see your own story in the Bible story. It’s not practicing our faith, it’s “faithing” our practice that must happen.

Jesus didn’t say, “Go and tell John that he needs to believe that I am the Lord, the Christ, begotten of my Father before all worlds. God of God, Light of Light, very God of very God, begotten not made, being of one substance with my Father.   He didn’t say, “now repeat it back to me so I know you go the words just right.  Now, all together so we all know what to believe.He didn’t say, “Repeat after me.”   He didn’t say, affirm this word formula. 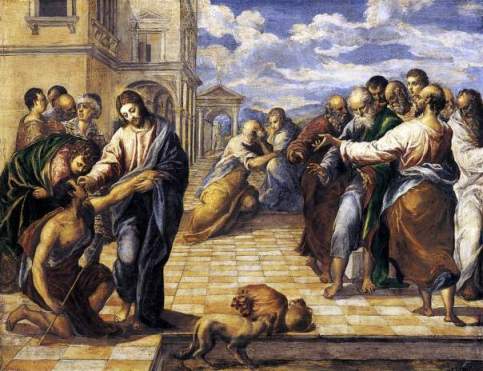 What he said was, “Go tell John what you have seen and heard.”

Notice that the verbs.  Things are happening to those in need.  John must have been reassured.  What Jesus did what people were hoping for.  What Jesus was doing puts, “Paid” to the baptism in the Jordon:  The Kingdom of God is come near you!  What we know is that people experienced something out there by and in the Jordan.

That was happening by the Jordon.  Even the priests came out.  Even people like me who think they have seen it all.  They also came to experience the Baptism of hope.  “Are you the one or should we wait for another?”

This is the one for whom we have waited.  Let us stir ourselves from sleep, rise up and follow him. AMEN.