I almost never engage in politics in the pulpit as that is not why I walk up into that holy furniture.  However, I am increasingly annoyed by the attitude of many American Christians in the never-ending culture wars that pass for a civic life in this country.  What has annoyed me?

It is very irritating to hear the talking heads of the Christian press as well as people I encounter  decry the “persecution” Christians are enduing in this country.Whenever I hear this sentiment, I remember the words of an anonymous Christian who said, “the most American Christians have suffered for the sake of the Gospel is MILD embarrassment!   This is absolutely true and to think otherwise is inflated and silly.  What set me off?  The images of Egyptian Coptic Christians attacked in the streets of Cairo while churches and homes of the faithful   burn in the background! 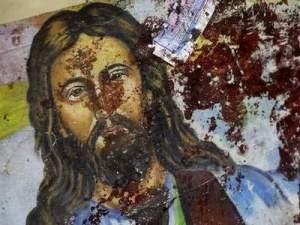 The Christians of Egypt are the largest community in the Middle East amounting to about 10% of the population of Egypt.  They have lived and  labored under the yoke of Islam since the late sixth or early seventh century.  Historically they are the descendents of the most ancient Egyptians and their language, Coptic, is ancient Egyptian written in Greek letters.  As is the case with the conquered the Copts occupy the lowest levels of society and account for the vast majority of sanitation workers.

Yet even in the face of periodic persecution and general prejudice they continue steadfastly in the faith of Jesus Christ. Under the leadership of the late Pope Shenouda III the church prospered.

For forty years as the 117 successor of Saint Mark the Evangelist he labored founding churches (one in Memphis), defending and proclaiming the Good News of God in Christ. He died last year beloved by his people and respected by the Muslim leadership.

Pray for the peace of Jerusalem and Egypt.  JWS