I have an abiding memory of sitting in the lap of great-aunt Myrtie Sewell on the bank of Anderson Creek up at Herman White’s place across the fields where the creek made a pool of clear, pure and very cold water. Other folks were spread out along the banks on quilts. They were there to baptize new believers from the first Baptist Church of Anderson, Alabama.  I watched my parents, first Neil and then Doris receive the sacrament, that great sacrament our Lord himself practiced and proclaimed when the Kingdom came near.

END_OF_DOCUMENT_TOKEN_TO_BE_REPLACED

My observation is that bad taste and bad theology come from a similar source.  The culprits range from the vacuous on the left to pretensions on the right.  Don’t take my word for it, you choose! 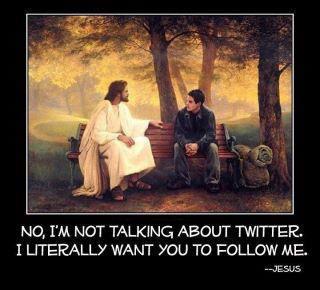 He pushed open the door and entered the Tower Room just as the deacon gave us our marching orders, ‘Go in peace to love and serve the Lordt.” He was tall, black and very handsome.  Neat is the word that summed him up. From the top of his head adorned with a braided Mohawk to the well maintained shoes, he was impeccable.  Where had I seen this look before?

END_OF_DOCUMENT_TOKEN_TO_BE_REPLACED

Like Loading...
We continue in our careful consideration of the Gospel of Luke in the long sequence of Sundays of Ordinary Time before the First of December. It is useful to look at the texts immediately before the reading for today and then those that follow directly.
BEFORE

Were I to name this I might call who’s in and who’s out.  The prepostions in and out get used a lot by Luke.  What might they tell us?

I am indebted to Ann-Janine Morey for this insight of the dominant use of Out in the first half and In in the second half.

Is this the end of the story. No, actually not.

I learned this very thing from just such a family.  Many years ago  a fine perfectly normal
family brought me their crazy member, as I recall,  to “be fixed.”   After quite a lot of work I realized finally that in this family the only healthy response was to be crazy! The “crazy” one was indeed crazy but was not nearly as scary as the so-called “healthy” family members.

The healed demoniac went throughout the ten cities [Mark says] preaching the Gospel.   End of story?    No, not at all.

James the Just, brother of Jesus, was the first Bishop of Jerusalem for almost 40 years beginning shortly after the resurrection until he was martyred ca.68 AD.

In 70AD Jerusalem was destroyed, the temple burned, and  Jewish state ended. Just after 70 Simeon bar Cleopas,  first cousin of Jesus, was elected the second Bishop of Jerusalem.  During the second rebellion against Rome, Bishop Simeon led the Church out the burning Jerusalem to Sanctuary in Pella. It turns out that Pella was  just south-west of Gadara and is one of the 10 cities of the Decapolis. There is evidence of a very early church there. Who do you suppose started that?

And so it is.  In the name of the Father, Son and Holy Spirit. Amen.

The GSF [Gadarene Swine Fallacy] is the fallacy of supposing that because a group is in the right formation, it is necessarily on the right course; and conversely, of supposing that because an individual has strayed from the group and isn’t in formation, that he is off course. The individual may seem lost to the group but not off course to an ideal observer.

In the region of these United States that serves as the redoubt for the faithful Christian remnant, Episcopalians are viewed by our fellow coreligionists, especially Protestants,  with suspicion.  There are several reasons for this.

One, we are lumped in with our Roman kin, who also by the way have their reservations about us.  In an unfortunate and long lasting political blunder Pope Paul III suggested that it was incumbent on loyal British Roman Catholics to murder Elizabeth I of Great Britain.   Thereafter even to this day American Protestants have a faint suspicion, mostly unconscious, that the Vatican and their local outposts are scheming against those who got away in the Reformation.

Second, we have as we always debated the issues of the day in a public forum and if not washed at least spot-cleaned our linens in public.  Although we, like all churches, have a spectrum of belief about most everything, we tend to be more, can I say it, liberal than most of our Christian neighbors.  By their lights we are, even our most conservative members, liberal.  This is  proved by the solemn vow I made almost 32 years ago at my ordination to the Sacred Order of Priests.   Notice the sacred pledge I made to God and the Church.

The Bishop says to the ordinand
Will you be loyal to the doctrine, discipline, and worship of  Christ as this Church has received them? And will you, in accordance with the canons of this Church, obey your bishop and other ministers who may have authority over you and your work?

Answer
I am willing and ready to do so; and I solemnly declare that I do believe the Holy Scriptures of the Old and New Testaments to be the Word of God, and to contain all things necessary to salvation; and I do solemnly engage to conform to the doctrine, discipline, and worship of The Episcopal Church.

So far so good, I find in the Bible and have always found there everything necessary for salvation.  Conversely, not everything found in Holy Scripture is necessary for salvation.  Therein lies the problem because if we are willing to leave things as loose, untied and untidy then we are soft on sin. Yes, beloved,  my people do not care when they bump into me in the Liquor store, actually they are likely to ask my opinion about the merits of various scotches.  But enough of that.

I’m rector of Saint John’s in Memphis, Tennessee, in many ways an example of the (rapidly passing) stereotype of Episcopal churches in that it has old Memphis families who by our standards are wealthy (some are by any standards on the planet wealthy).  That image is not helped by the fact that from the front doors of the Church you look directly across the street to the golf course of the Memphis Country Club, yes, we are, God help us, Saint John’s by the Country Club.  By every measure most would count it is a pretty healthy place, especially considering the conditions of our time.

Memphis, sitting on the East bank of the Mississippi, is the capital of the Mississippi Delta encompassing the delta land of Mississippi & Arkansas. The South is as Flannery O’Connor once put it, “Christ haunted,” and there are three things always in play in Memphis: Religion, Race and Pork Barbeque. We are not Chinese but if we were in Memphis it would always be the year of the Pig.  Which of these is the most important depends on who you ask.

America may be post-Christian but in the South there is a lot of romance around lost causes. If you want support for a cause just let drop the remote possibility of victory and folks will sign up in droves. That may explain how by providence Saint Judes Hospital was built in Memphis, Jude being the patron saint of lost causes and all. In town many clergy serve as chaplains to embattled freedom fighters waging guerrilla warfare in the suburbs mistaking the passage of time as a vast conspiracy. The term “culture wars” is barely a metaphor in these environs.

In reaction to such earnestness, Episcopalians have for a long time affected a sort of genteel ignorance about the faith. Although a luxury we can ill afford in the 21st Century, we rather like it. It passes for restraint rather than the cowardice it often is. That coupled with the fact that many of us are refugees from Southern Christianity with its peculiar language of religious enthusiasm and certainty makes a sentence containing the words Challenge and Bible give rise to visions of tent meetings, sword drills and mean-spirited righteousness.

Churches like Kudzu cover the city.  It must be the humidity but Churches grow particularly large here.  I think the biggest tops out north of 30,000 souls.  By those standards Saint John’s is small. Also, given the evangelical certainty and because we are woefully ignorant of Bible content, we are intimidated when fellow workers do theological reflection by the water cooler.  So, in all honesty, we are a bit justified in our bewilderment.  We are, as Bishop Stephen Neill once put it, “lone Anglican lions in dens of Southern Baptist Daniels!”  The decline in the Church and American Christian Culture we see around us is somebody’s fault and since blame is easier than reflection, clothed in denial we project our failings, rearrange the pews grasping for a new salvation system rather than meaningful renewal of the one we have.

I am encouraged by the desire of folks to learn the Bible.  This is a good thing!  This is a good thing especially when we engage Holy Writ with the reason and tradition that God has  blessed us. Here in the redoubt of Protestant Christian culture among the tulip trees we are tempted to take up the literal template and reduce the text to a rule book.  As I ruminated over this challenge a new book arrived in the mail (yes I still like a book in hand).  As often happens, I opened it and the first page of the introduction spoke to my concern.  I am also happy to say that the author is a professor of my Alma mater, Asbury Seminary in Wilmore, Ky.  She eloquently describes the careful, non-dual way of the Anglican tradition.

“The Bible, in all its parts, is intended to communicate to humanity the realities of redemption. Over the centuries, the church has stumbled when it has forgotten this truth, and has thereby, ironically, damaged the authority of the book from which it has drawn its life. Often the error has run in the direction of making this book less than it is–less than the inspired Word of God, less than the supernatural report of God’s doings throughout the ages, less than the definitive rule for faith and practice among those who believe. But just as often, the error has run in the other direction—attempting to make the Bible more than it is. Too often in our zeal for the worldwide influence of this book, we forget that it was not intended as an exhaustive ancient world history, or a guide to the biology and paleontology of creation, or even a handbook on social reform. We forget that this book was cast upon the waters of history with one very specific, completely essential and desperately necessary objective—to tell the epic tale of God’s ongoing quest to ransom his creation. And to, thereby, give each generation the opportunity to know his amazing grace.”

From Introduction The Epic of Eden: A Christian Entry into the Old Testament – Sandra L. Richter

“Beyond the spiritual certainty of Contradiction lies the mysterious land of Paradox.”