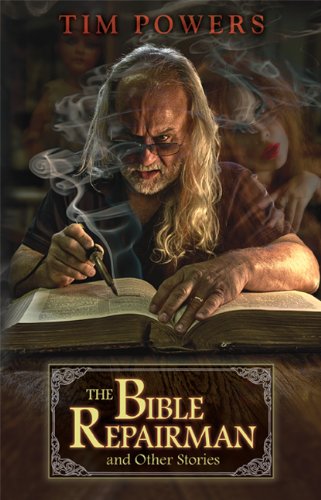 Tim Powers tells a good (though dark) tale in his collection of short stories, The Bible Repairman. I was, of course, intrigued by the title and began ruminating over how and what one would repair. I learned that “repairing” Bibles is actually a side line for Torrez, though I will leave it to you to read Mr. Power’s short story and find out his primary occupation.

“He [Torrez] had a couple of Bibles in need of customized repair, and those were a easy fifty dollars apiece – just brace a page against a  piece of plywood in a frame and scorch out the verses the customers found intolerable, with a wood-burning stylus; a plain old razor wouldn’t have the authority that hot iron did. And then of course drench the defaced book in holy water to validate the edited text. Matthew 19:5-6 and Mark 10:7-12 were bits he was often asked to burn out, since they condemned re-marriage after divorce, but he also got a lot of requests to lose Matthew 25:41 through 46, with Jesus’ promise of Hell to stingy people. And he offered a special deal to eradicate all thirty or so mentions of adultery. Some of the customized Bibles ended with little weight besides the binding.”

In a peculiar sort of way, one must accept the authority of Scripture to even want to find a way around the verses that trouble our consciences.  Having established a twisted respect for the power of Holy Writ the only way to manage its demands is to stoop to the use of magic.  And so, people pay Torrez fifty bucks a pop to neuter the offensive passages.

Mark Twain once said it was not the passages that he didn’t understand that bothered him as it was the passages he understood clearly.  What would happen to me and you if we simply began to do the things we already know to do?  People of faith recognized long ago the sacramental nature of confession.  In fact even in this post-Christian/Modern period the State of Tennessee recognizes the power and authority of private confession by statute and actually Tennessee goes even further and criminalized the betrayal of such confidences!

What if rather this week we do a moral inventory and throw out those things that trouble us, deal the people we hurt or who hurt us. If after that, for any heavy lifting call a discreet priest and let him/her take out that particular garbage for you.  Really, call me,  it comes with your baptism, really, it’s on the house!  I promise.