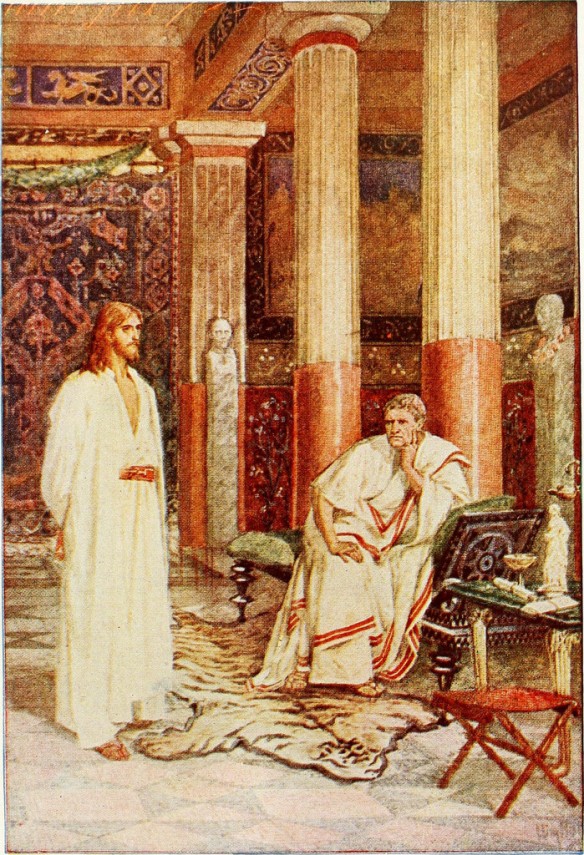 Sunday after Sunday in the Creed we say, “Suffered under Pontius Pilate.”

Who was this man?

This young, ambitious, proud and hot tempered Roman Aristocrat arrived in Judea, accompanied by wife (which was most unusual) to become governor of Judea in 26 A.D.  He governed there for ten years.

Immediately his temper got him into trouble.  He brought the Imperial Standards into Jerusalem.  The standards had the image of the Emperor on them.  Jewish law forbade graven images so bringing them into the holy city provoked a riot.

Then Pilate took money from the temple treasury to finance the building of an aqueduct to bring water into the city.  The temple authorities complained to the Emperor.

Another complaint was made to the Emperor when some Galileans were killed with their sacrifices in the temple.

§  These issues alone would not have been too much trouble

§  These missteps coupled with the fact that Sejanus had fallen from power and could no longer give him political cover.

§  Pilate was in the precarious position being squeezed between Rome and the hostile population in Judea.

In April of 33AD, the eighth year of Pilate’s administration, he met a young man without much future.

Jesus did not have much family background.

He was not wealthy.

§  He was from a poor part of a poor province.

§  There were questions about his legitimacy and

§  He had powerful enemies: the Pharisees, the priests and the Sadducees.

Jesus proclaimed the Kingdom of God, healed the sick and cast out demons.  He said things like, “They who try to save their lives lose them and those who lose their life for my sake will find them.”  He entered Jerusalem before Passover amid the crowds proclaiming him Messiah, the anointed one.  There was a scene in the Temple where he publicly took the High Priest and his family to task for their corruption.  The police arrested him.  The supreme council, the Sanhedrin, tried him finding him guilty of blasphemy, a capital offense.  Only the Roman Governor could condemn someone to death. So off they hauled Jesus before Pilate.

The young Roman with a future met the man from Galilee who had no future.

Claudia, his wife, sent a message to Pilate warning him, “Have nothing to do with that just man.” She had been troubled on his account in a dream.

A later legend has it that the Pilate & Claudia had a son who was very ill and that when requested by Mrs. Pontius, Jesus healed the boy. (That is interesting but un-provable, although there are letters purported to be from Claudia Procula to a friend named Flavia dated some years after the Gospel accounts.

The authorities said, “If you do not crucify him, you are no friend of Caesar’s.”   Pilate was caught.  Jesus was innocent.  He had some sense of fair play.  But if Jesus was released another critical report would go the Emperor.  He had his future to think of.  He had to protect what he had worked so hard to gain.

§  A means of death has become a sign of blessing.

§  Christians believe that the future is not based ultimately on anything we do.

§  The future is based not on what we know but who we know!

Jesus died on the Cross.

One version says he committed suicide.

Another source reports that he was exiled to Vienne in Gaul/France where he died.

We all have a future,

§  IN THE MIDDLE-PASSAGE WE STRIVE

§  IN OLD AGE WE CONSIDER

§  The priests made me do it

§  I did nothing wrong

Pilate did all this in defense of his future, not realizing that the future is NOW!

Our Future is NOW.

We are busy.  I am a descendent in the Sewell line from Henry Sewell who arrived in Virginia in the early 17th Century.  He is my grandfather 11 generations removed.

§  I believe that if Grandfather Henry were plopped down this morning with us that he would be psychotic within 36-48 hours, why, because he would simply be unable to deal with the amount of stimulation that we consider normal.

§  I also believe that given all the demands this stimulation makes of us that if most of went to Hell it would be because we had been too busy to make other arrangements.

§  If I may borrow from Saint Paul, “Beloved such things ought not to be!”

I am determined to the degree that I have influence, that we take time to recover from the mild psychosis we call our schedules, take stock of our souls, and move to do what is needed to do the most important work that a Christian can do.

Pilate had no idea that on that day in April 33, that what he did that day would format the very calendar for evermore.  I don’t know if he ever believed on Christ.  But what I do know is that we do know who Christ is and that the most important thing we can do this week is to come to this place to experience the love and acceptance of God.

If not now, WHEN

If not here, WHERE

Our very future depends on it.