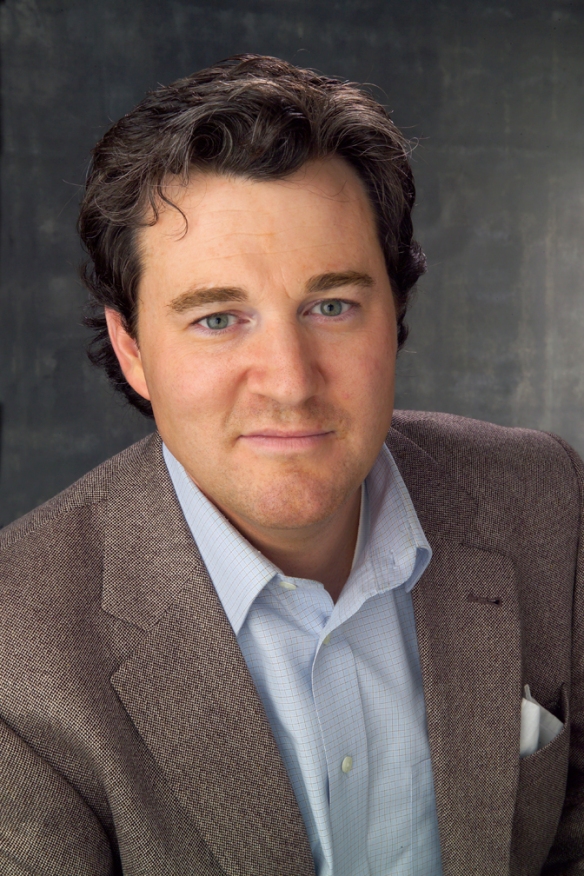 I’m at the end of a visit to a Screamfree Parenting seminar in Atlanta. My new friend Hal Runkel has taken Family System’s Theory internalized it, stripped out the jargon and come up with the essence of Bowen theory without the psychological language. It works. He has the gift that I admire in Robert Capon the capacity to treat complicated issues thoroughly yet accessibly.

This is the first travel leg of my Sabbatical. Next week, Marillyn and I come back to Atlanta on our way to Great  Britain.

My hope for screamfree is that we can use it to support the families of Saint John’s and through them to reach into Memphis especailly StopTheKilling movement.

If Adam had not sinned, humanity would have remained in childlike simplicity. A good thing doubtless. But if sin had not entered the world, Christ would not have been born to save humanity. That is, the glories of mature virtue, tried and tested, would never have developed. Heroism is better than innocence. And worth the pain. Or so says Felix Culpa. 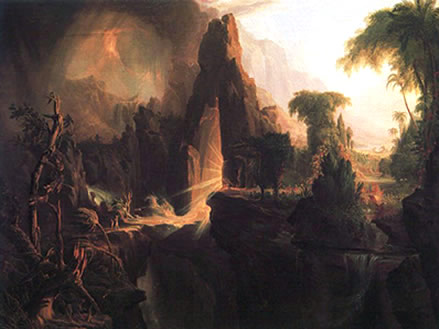 Expulsion From The Garden of Eden – Thomas Cole 1828

High in front advanced,
The brandished sword of God before them blazed
Fierce as a comet; which with torrid heat,
And vapour as the Libyan air adust,
Began to parch that temperate clime; whereat
In either hand the hastening angel caught
Our lingering parents, and to the eastern gate
Led them direct, and down the cliff as fast
To the subjected plain; then disappeared.
They looking back, all the eastern side beheld
Of Paradise, so late their happy seat,
Waved over by that flaming brand, the gate
With dreadful faces thronged and fiery arms:
Some natural tears they dropped, but wiped them soon;
The world was all before them, where to choose
Their place of rest, and providence their guide:
They hand in hand with wandering steps and slow,
Through Eden took their solitary way.
(XII. 632-49)

This mural, painted on the interior of the John the Baptist Church at the Jordan River, depicts Jesus’ baptism by the hand of John. Author: David Bjorgen

The late Ellis Peters, an English mystery writer, set her novels in an fourteenth century Benedictine monastery in Shrewsbury, England.  The hero of her tales is an elderly Welsh monk named Cadfael. In one novel he speaks of a “sudden irresistible movement of Grace”, that redeems the lost and worn situations of life. I think of those words often, a “sudden irresistible movement of Grace.”

Today we celebrate the manifestation of God’s sudden irresistible movement of Grace, which we call Jesus, the Christ.  On this first Sunday after the Epiphany, we celebrate the Lord’s baptism. The word, Epiphany [pifaninw, epifaneia, epifanhs]  is rich with meaning. Epifaninw  means to reveal, to manifest, to show forth, to shine, light up, effective help.  An Epiphany is like the cavalry suddenly appearing over the hill, just in time to save the day.

The Church has used different stories from scripture as ways of reflecting on Christ’s manifestation:

1.      The Church in Western Europe focused on the visit of the Wise men to the newborn Messiah as the first manifestation of Christ to the Gentiles.

2.      The Church in Egypt focused on the first miracle of Jesus, the turning of water into wine at the marriage feast at Cana, as the manifestation of our Lord’s coming into the world.

3.      The Church in the Eastern Mediterranean focused on the Baptism of our Lord as the manifestation of his public ministry.  It is story that we read today.

At the beginning of his public ministry, Jesus went to John the Baptizer and was baptized in the Jordan.

What does this baptism mean?

As someone has said, Jesus went down into the water clean and came up dirty, in order that we can go down into the water dirty and come up clean!  Baptism always says more about God than it does about us.  Christmas, the coming of God in the flesh, the incarnation tells us that it is good to be human. If God chose to share human flesh then flesh cannot be bad.

II. Empowerment of Jesus to be the Christ and through him to all who believe.

Mark, in his usual spare style, points out that by his baptism, the Lord was now fully equipped for his ministry. The Holy Spirit was active in the life and ministry of Jesus, from the baptism that began it to the cross that fulfilled it.  Not only was Jesus baptized, but those who believe on Him are baptized as well.  What is that about?  What is it that we have in baptism?

“Everyone who has been validly baptized has received all grace hiddenly!  The rest of the life of Christian discipleship consists of a revealing, a manifestation of baptism.  The experience of metanoia, of awakening and repentance, can be seen as a showing forth of the grace given in baptism.”  Mark the Hermit – “On Those Who Think They Can be Justified by Works”

The effect of what we do today will be revealed/manifested for years to come.  The manifestation of God’s grace given to all of us who are baptized will continue through our lives and into the life to come!

Today we hear again the promises that are made at baptism. They are:

1. To renounce what is wrong this is to begin to move in a particular direction, following Jesus.  We are called to continually to put our heart and soul into the posture to follow the risen Christ.

2. To believe what is true. What we believe is important.  It is also an ongoing process of testing our beliefs and reaffirming our deepest concerns.  This PROCESS never ends in this life.

3. To follow what is right. The Christian life is a process as well as an event.  We are called and given grace that we make choices that continue our cooperation with the risen Christ.

We cannot do this by ourselves.  It is as the liturgy states: “with God’s help.” I almost always say at a baptism that baptism always says more about God than it does about us.  Baptism is a gift.

C.S. Lewis writes in Mere Christianity,  “And now we begin to see what it is that the New Testament is always taking about.  It talks about Christians “being born again”; it talks about them “putting on Christ”; about Christ, “being formed in us; about our coming to “have the mind of Christ.”  Put right out of your head the idea that these are only fancy ways of saying Christians are to read what Christ said and to try to carry it out – as a man may read what Plato or Marx said and try to carry it out.  They mean something much more than that.  They mean that a real Person, Christ, here and now, in that very room where you re saying your prayers is doing thing to you.  It is not a question of a good man who died two thousand years ago.  It is a living man, still as much a man as you, and still as much God as He was when He created the world, really coming and interfering with your very self; killing the old natural self in you and replacing it with the kind of self He has.  At first, only for moments.  Then for longer periods.  Finally, if all goes well, turning you permanently into a different thing; into a new little Christ, a being with, in its own small way, has the same kind of life as God; which shares in His power, joy, knowledge and eternity.”

“You are the body of Christ; that is to say, in you and through you the method and work of the incarnation must go forward.  You are to be take, You are to be consecrated, broken and distributed, that you may become the means of grace and vehicles of the eternal love.”

“Vocation is a gift of grace, not a status to be obtained or a position earned.  And just because it is a gift and not something we have acquired, this Divine affirmation needs to be heard over and over again – through prayer, in the sacraments, in outreach, in daily living,

but most of all, in the fellowship of the faithful.” Synthesis

Today we remember who we are.

Today we remember to whom we belong.

Today we remember what we are about.

Today we remember our destination.

Today we remember that all that has been manifested to us is in turn to be manifested through us to others.

The First reading is the beginning of creation.  God creates and God names day and night. The psalm picks up the refrain, “God’s voice is a powerful voice. God’s voice is a voice of splendor.”  In Acts Paul asked about the folk’s baptism and hearing that they had only received John’s baptism – baptized them in the Name of Jesus – the same Jesus who was named God’s Son on the day of his own baptism.

Flask with the adoration of the magi Metropolitan Museeum of Art