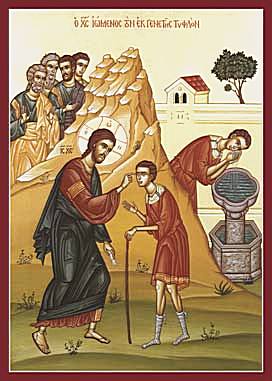 It is easy to assume that the truth we can see and affirm is all the truth there is or ever will be. Many people behave as if the present truth is the eternal truth and this truth is eternally under attack.

The Pharisees are such folks.

A blind man gains his sight and has growing insight into the nature of Jesus.

The Pharisees and their increasing blindness and lack of insight into Jesus.

We will look at the story though the eyes of the blind man and see how he gradually sees who Jesus really is!

AS Jesus passed by he saw a blind man, blind from birth.  And his disciples said, “Lord, who sinned this man or his parents?”  First century Jews believed that any misfortune, illness, disease, and accident: all the bad things that happen to people come from some sin.

There are lots of folks who believe the same thing today.  If you don’t believe it let some “terrible thing” befall them and they’ll say,  “What did I do?”  “You know I haven’t been in Church in a while.”  It’s as if God takes attendance so that when you miss enough times and the absences and tardies add up, then the alarm goes off and he says, “OK it’s time to teach them a lesson.” “Let’s see now, it was the flu the last time.  It could be an accident this time or perhaps their sewer should back up.”  That is not God’s way.  He doesn’t sent out Tornadoes with people’s names on them.  Bad things happen to good people and good things happen to bad people.  “The rain falls on the just and the unjust.”

However, the Jews carried this cosmic paranoia one step further.  They believed in pre-natal sin.  One could sin before one’s birth.  What a novel thought. That’s one that not even we had thought up, yet!   This fellow must have done something awful if he has been blind from birth.  Or was it his folks who sinned?  Who sinned, this man or his parents?

In Genesis, God forms Adam from the earth. Here Jesus takes earth and restores sight to the blind.  As Paul writes to the Roman Christians, “If anyone is in Christ, they are a new creation.”  Then Jesus tells the man to go and wash at the pool of Siloam.  Here John picks up theme of water as cleansing and restoring, prefiguring the waters of baptism.   And the blind man was healed.  [The word healed and saved in Greek is the same.]

Now Jesus has done this “work” on the Sabbath, which is forbidden so there is a great outcry by the neighbors and they take the man to the Pharisees.

1.      Are offended by breaking the no working on the Sabbath law.

4.      Are not interested in where the truth lies, they keep trying to trap the man in the retelling the story.

They exhibit increasing blindness as they refuse to accept the healing as real and valid.

Notice the progression of insight in the blind man in terms of how he speaks of Jesus.

1.      He calls him nothing.  In fact he doesn’t know anything about Jesus.  Jesus came to him and ministered without the man’s request. Many of us were baptized as infants or small children.  The act of baptism was, for us, an act of God’s grace.  He reached out to us before we ever knew he existed or had experienced our own need.

2.      “That man called Jesus” — Someone told him the man who healed him was named Jesus.  That was all he knew.           A Sunday school Class was composed of three and four year olds.  The teacher asked, “Do any of you remember who St. Matthew was?”  No Answer.  “Well does anyone remember who St. John was?” (Still no answer).  “Surely someone must remember who Peter was?”  All were thinking but still no answer.  Finally a little voice from the back of the room said,  “I fink he was a wabbit!”

Many of us know Jesus by name, but not much else.  Jesus is part of our culture.  It’s good for the children to go to Sunday school.  We want to have the children “done”: baptized, confirmed.  It is sort of like be inoculated from the measles.  But is it more than that?

3.      “He is a prophet” The Pharisees cross-examined the man.  “Who is he?”  “He is a prophet!”  There are many around who think that Jesus was a great man, a great teacher, but beyond that they are not sure.   Or there may be those who want Jesus to be a magician and “fix” what ails them and their lives, without cost to them. Magical thinking: “Magic, Science, & Therapy” in Malinowski, Magic, Science, & Religion. The three are different.  Magic is always ad hoc: How do I get this specific thing changed.  Magic focuses on cause and effect.  How can I get my blindness fixed?  This doesn’t have anything to do with faith necessarily in fact magical thinking impedes spirituality.  Anything that shoots for certainty denies spirituality.   Jesus is not into magic.

Like the blind man we are all on a journey to God.  We are in different places in that journey.  The real issue is to walk in the light we have until we have more light.  That may mean walking to the edge of the light and stepping into the darkness before light comes. Wherever we are  … we meet God as we meet ourselves:

It seems that a stranger walks upon a man bent over on his hands and knees groping under a street lamp in front of his house.  The stranger asks the man what is the matter.  The man on his knees replies that he is looking of his keys.  The stranger offers to help him, and gets down on all fours to scour the ground for the lost keys.  The search continues — but to now avail.

Finally the stranger asks, “Where exactly do you remember seeing them last?”  The man reflects momentarily, and then replies, “In my house.”  “Then why,” the stranger asked, “are we looking out here?”  “Because,” the man insisted, “it’s dark in the house.”

It is essential that we commit to be where we are: in our darkness, in our brokenness, living neither in denial or avoidance.  Just to be where we are.  And let pain be pain; brokenness be brokenness; darkness be dark.  In other words live in the truth and follow that truth wherever it leads us.  I believe that it will lead us to the Christ. Simone Weil once said, “If you turn away from Jesus looking for the truth you will not go three steps until you fall into his arms.”

For the rest of Lent let us embrace the discipline of:

Paying attention to our dreams.

Find someone with whom we can trust to share our darkness …

This is never easy and if we find it so, likely there is likely something wrong.  The Pharisees thought it was easy.  Flannery O’Connor once wrote: “What people don’t realize is how much religion costs.  They think faith is a big electric blanket, when of course it is a cross.  It is much harder to believe than not to believe.   If you feel you can’t believe, you must at least do this: keep an open mind.  Keep it open toward faith, keep wanting it, keep asking for it, and leave the rest to God.”

Let that be our prayer halfway through Lent.  As we move closer to Holy Week, let us be open to meeting Jesus in new ways in new places as we anticipate the Easter Feast.