Easter not one day but fifty days 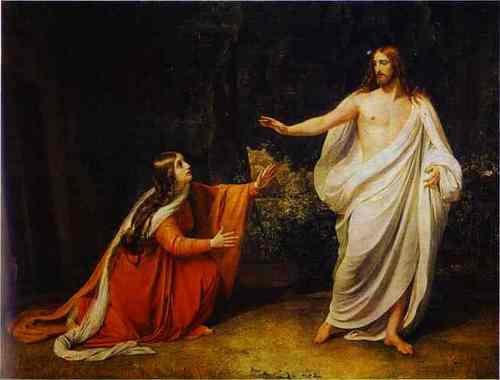 Alexander Ivanov — The Appearance of Christ to Mary Magdalene 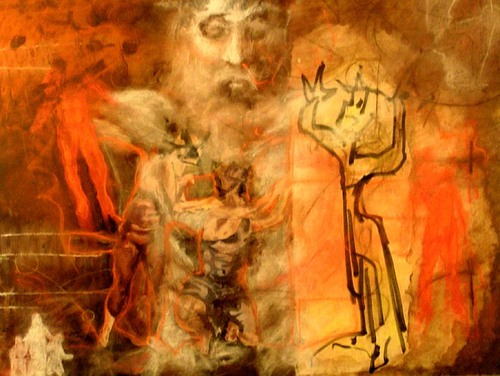 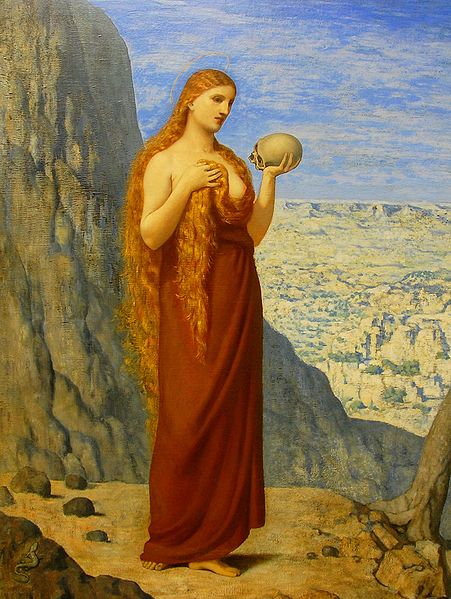 Mary from Magdala came early in the morning on the first day of the week accompanied by other women to the tomb of Jesus. They brought spices to complete the burial rites. When they arrived the stone was rolled away from the tomb entrance. Then they realized that something had happened. On this morning of resurrection, with your indulgence, I want to borrow from Robert Farrar Capon and his meditation on death and resurrection.

“Let me borrow for our purposes imagine an egg, the ubiquitous Easter egg, and let that represent the whole time of my life. Now since the first of the grips on my life is my own, I shall represent that by putting the egg in my left hand and closing my fist around it: behold, my times are in my hand. But since the other grip on my life is God’s or more precisely, the grip of Jesus who as the Eternal Word of God makes and reconciles me at every moment – let me represent that by making a second fist over my left hand with my right. Behold again: not only my times but even my very holding of them are totally in his hand as well. The illustration is going swimmingly. We have even touched base with Psalm 31:15: “my times are in thy hand.”

Examine next, however, the differences between those two grips. As I hold my life, I have only a weak and partial purchase on it. Any one of a thousand accidents can snatch it from me in an instant. And even if nothing goes wrong, I can hold onto only the smallest portion of it at any given moment: of all my times, only the present is really in my grasp. The past I hold only in remembrance – mental, physical or psychological; and the future I hold even less adequately – in guesswork, hope or fear.

Worse yet, I hold none of those times fully. As far as my present is concerned, I have an effective grip only on what I’m actually paying attention to at the moment. The pencil in my hand is under control; the bread I forgot I was making is now a hopelessly over-risen mess in the kitchen. And as fat as past and future are concerned, things are worse still. Even if my memory of the past is better than it was of my bread there is no way I can go back to remedy a single mistake or improve a single performance – or even make sure I have not remembered the whole of it partially, tendentiously or wrong. And as fat as the future is concerned, there is simply no way of getting to it al all. Except of course by waiting. But that does no good because by definition the future as such never arrives. When it does turn up, it’s only one more present: what is really yet to be just hides out there in the dark as before. 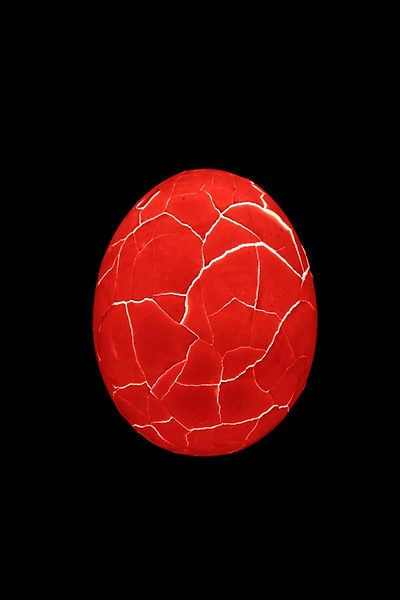 In other words, not only is my grip on my times weak and partial, it is also unreconciled and unreconcilable. Imagine the hard-boiled egg that represents my life as a peeled, sliced one. And while you’re at it make it extremely large so that it can have as many slices as I have days – but leave all the slices together as a whole egg. Now then. As I go through the egg of my days slice by slice – beginning with my birth at the big end, proceeding delightedly through the days of youth and yolk and coming at last to the ever-decreasing slices of nothing but white – I can have a real influence only on the slice I happen to have reached and on the portion of it I have managed to pay attention to. If I wasted or abused a previous slice I can do nothing to help that now; any yolk I didn’t eat today remains uneaten forever. 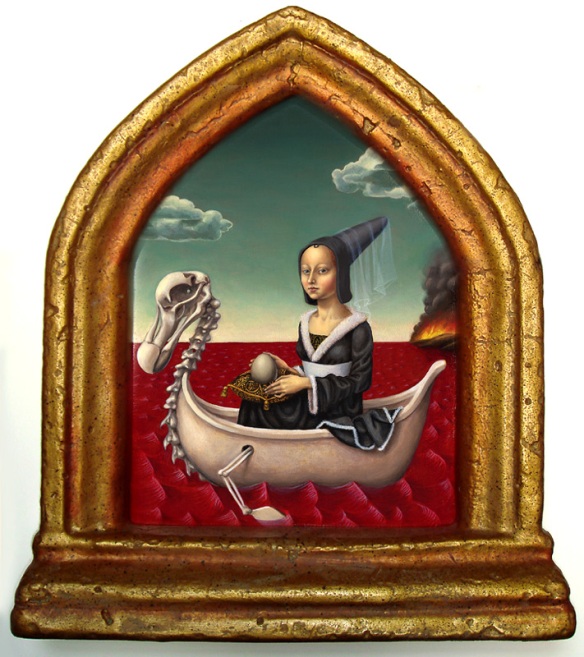 In God’s grip however – as he hold the slices of my time – all my days, past or future, are simply present. To me they may be then and then but to him they are all now. The yesterday I cannot reach is as accessible to him as the pew we sit on this morning is to us. The future I can only guess at is as known to him as any other slice of the whole egg he holds in his everlasting now. God, in other words, is the eternal contemporary of every moment of my times. Accordingly, there is no moment of them that is ever lost to him – and consequently no single, briefest scrap of my life that is not as he holds it safely ensconced in eternity.

Eternal life therefore, is not another life after this one but simply this life as held eternally by Jesus – by the Wisdom of God who mightily and sweetly orders all things, even the things we disordered. And death? Well, for openers death is just one of the boundaries delimiting the things that make up a particular life. But it’s a good deal more than that, and if you now put all the images together you’ll see how. 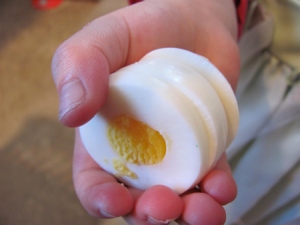 Bring the peeled sliced egg down to size againand put it back in my left fist inside my right fist. Then ask: what happens when I die? Well, obviously I lose my grip on the egg: my left hand, if you will, becomes …nothing. All its records of its dealing with the egg, all its knowledge of details, all its mistakes, all its missed opportunities simply cease to exist when it does. When I’m dead: I have no brain to think with, no nose to smell with, no eyes to see with – nothing at all good, bad or indifferent with which to hold onto a single thing.

But when my grip goes, God’s grip does not. The egg about which the left hand could do so little even while it had it, is still held for endless exploration in the right hand. All the days I could not keep are stored for me at home in him. My death therefore is not simply an end; it is an absolution. It is my release from my own radically imperfect way of holding my life and my introduction at last to the best of all possible ways of holding it in the hand of Jesus.

Jesus came to raise the dead: to take those who had completely lost their grip and give them back every last one of the days that he, as their resurrection and there life, had always held for them. He never met a corpse that didn’t sit right up then and there because, although it may have been dead as a doornail on its own terms, it was alive willy-nilly in him and just couldn’t help showing it. 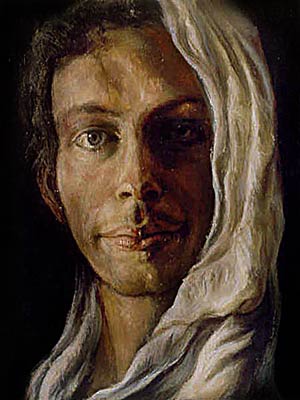 Pietrolussu – Lazarus just as it happened

When Jesus cam to raise Lazarus, the dead man’s sister Martha had her doubts. Like the rest of us she could imagine eternal life only as something out there – as a blessing to be achieved only after the protracted clanking of some religious or philosophical contraption. And therefore when Jesus told her her brother would rise again, the furthest thing from her mind was that it would happen on the spot: “I know,” she said “he’ll make it at the last day.” but what Jesus in effect said to here was: “Wrong! He’s made it now. I am the resurrection and the life. He who believes in me, eve though he’s dead, will still live. And whoever lives and believes in can’t possibly die in eternity – because in eternity is exactly where I’ve got him for good.” Lazarus, in short, might lose his own grip on his life but he could never shake loose of Jesus’. Ergo forth he comes when the Word who holds him speaks his name.

One more refinement of the illustration and we’re through. If you want to do justice to the note of believing that Jesus insisted on with Martha, put a glove on the left fist. Do you see now? The life of faith is simply the constant willingness to trust that just beyond that glove there’s another hand that holds out life along with us. We are invited to believe not that we will rise or that we will have eternal life, but that we have it right now and that we can enjoy it at the price of nothing more than slipping off the glove of unbelief that’s the only thing separating us from it.”

Now go back with me to the beginning of this day of resurrection. There at the tomb are the women, timeless icons of faith and redemption. Consider Mary of Magdala – she stands at the tomb on that morning as the counterbalance to Eve at Eden. As Craig Keener puts it, Mary at the tomb is the reversal of Eve at the fall. As she was at the fall now Mary is at the arising. As Eve ate to the lost of innocence now Mary delivered from demons is witness to the restoration of humanity to the new walk of life. 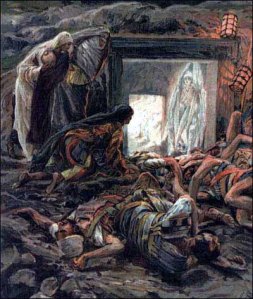 Mary Magdalene and the Holy Women at the Tomb – James Tissot

The ubiquitous Egg – is a symbol hope and resurrection and a symbol of the perfect state of unified opposites. Our God has acted and now the old splits of good & evil, sin & virtue, life and death are overcome and united in the resurrection of Jesus Christ, our Lord.

My friend, David Bargetzi, says that it is a greater sin not to dance in Easter than not to fast in Lent. 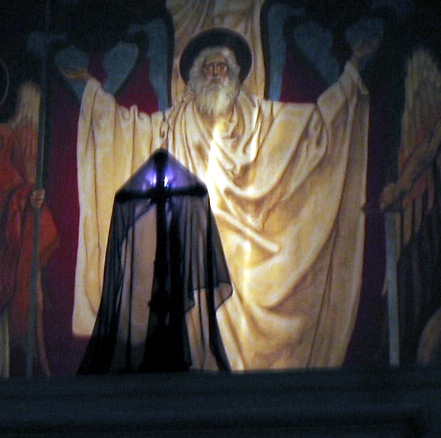 Today (Thursday) is the first day of the Tridium, the holy triad of Maundy Thursday, Good Friday and Holy Saturday, leading to Easter the day of resurrection.  The word Maundy comes from the Latin Mandatum meaning law or mandate. The new mandate Jesus gives the apostles and us is that we love one another.

This new law is displayed in the unique liturgy of this night as Christians wash feet, bring for the hungry, eat an agape (love) meal and strip the altar. By ancient tradition food is brought on this night to be distributed to the poor.  It is a token of the saying, “the fasts of the rich are the feasts of the poor.” It is also the privilege of the baptized to wash each other’s feet exercising the ministry of the towel as sign of their servant ministry. Tonight we eat a simple meal as the disciples ate with Jesus remembering the institution of the Eucharist.  After singing a hymn we return to the Church stripping the altar and ornaments from the sanctuary (the area behind the altar rail).

In all these actions we remember – the word is “to remember with power “ the action happened in the past with the effect continuing in the present into the future. I invite you to stretch and participate in these acts whereby we affirm who we are as baptized members of the Body of Christ, the Church. 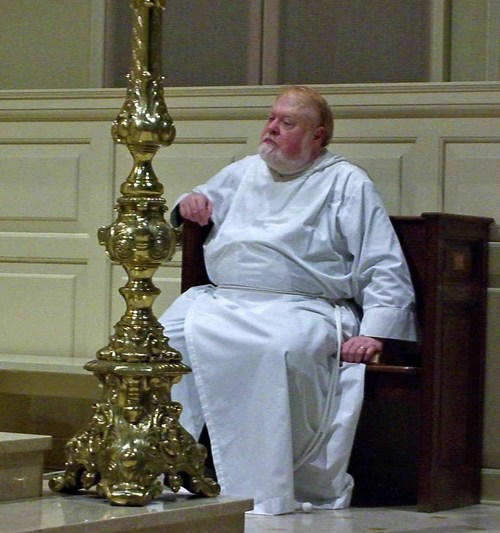 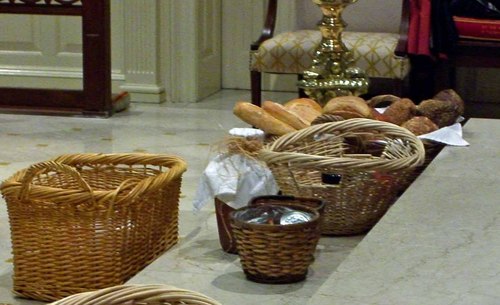