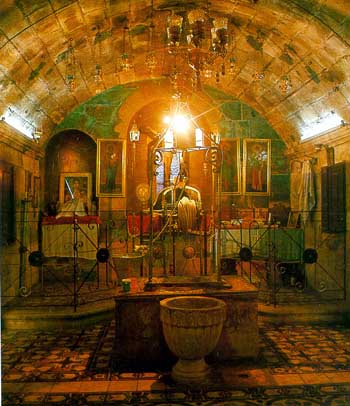 Located 3/4 mile south of Nablus, Jacob’s Well is where Jesus met the Samaritan woman who offered Him a drink of water. Jacob dug the well for himself, his children, and his flock on a plot of land he bought upon his return from Mesopotamia. The Crusaders restored it over the well. Today, it stands within the walled complex of the Greek Orthodox Monastery.

“Communication is primarily an emotional process not an intellectual one.”

We think because we said the facts clearly. We have communicated, but the quality of one’s communication is the response one gets.

1.       DIRECTION:  People can only hear us if they moving toward us.   So long as we are chasing them, the message never catches up.  To communicate we have to change the emotional climate to encourage them to turn toward us.

Too Far:  too distant to be able to hear.

Too Close: So close can’t hear.  If two cells of the same kind come too close one of them will disintegrate.  The more passive cell will decompose.

In today’s Gospel lesson the conversation between Jesus and the Samaritan woman, illustrates the very point I want to make:  communication is an emotional process.

It was a conversation that should have never taken place.

In 721 BC the northern 10 tribes of Israel were conquered by the Assyrians and deported, never to return to their homeland.  The Assyrians repopulated Israel with five different peoples deported from their homelands.  The two remaining Jewish tribes lived on in the Southern Kingdom of Judah.  The five peoples relocated by the Assyrians intermarried with the remnant of the Israelites left behind.  Their descendants were the Samaritans.  The Jews in Judah considered the Samaritans, mongrels and worse.  So the Samaritans built a temple on Mt. Gerizim to rival the temple in Jerusalem where they were not welcome.

In Jesus’ day, Jews would travel around Samaritan (doubling the distance) to avoid dealing with Samaritans.  But Jesus and his disciples, on their way to Galilee from Jerusalem, traveled though Samaria and stopped at Sycar.  The disciples go into town.  Jesus waited by the well.  It is now noon.

A Samaritan woman comes out to get water at Jacob’s well. We know where that well is today.  It is 105 feet deep and it is the well that Jacob dug there.

Notice the emotional process that takes place between Jesus and the woman.

Jesus:  “Give to me to drink!”  The question gets her to move toward him and a dialogue ensues.

Jesus:  “If you knew the gift of God and who it is that is saying to you, ‘Give me a drink, you would have asked him and he would have given you living water.”

Woman:  “Sir you have no bucket and the well is deep, where will you get living water?  Are you greater than our ancestor Jacob?  Who gave well and with his sons and flocks drank from it?”

Jesus: “Whoever drinks of this water will be thirsty again – but those who drink of the water I give will never be thirsty.  The water, I give will become in them a spring of water gushing us to eternal life!”

[This gets her where she lives.  It is a most powerful image.  She was tired of coming for water in the heat of the day.  Most women drew water early in the morning or late in the afternoon.]  She comes nearer.  The distance closes.

Woman: “I have no husband.”

Her anxiety is off the scale!  She then changes the subject.

Woman: “I see you are a prophet.  Our ancestors worshipped on this Mountain, but you say that Jerusalem is the place to worship!”

Proteus:  a minor Greek god of the sea.  He could tell the future.  But whenever he was asked a question, he would change shape into all sorts of monsters and terrifying creatures.  If the person who asked the question would just hold on to Proteus long enough, he would resume his original shape and answer the question.   Often when anxiety is high enough people will go Protean on us.  We’ll ask a question and they won’t answer it.  They’ll say, “Well you certainly didn’t do what you were supposed to do.”  It is an avoidance mechanism.

Not too close: The Jews have an idea called Zim Zum, which means that God contracted/limited himself in order for creation to exist.   Self-limitation is the gift God gave humanity so that we might be truly free.  We are free to choose.

Now back to today’s Gospel.

Woman:  “I know that Messiah is coming” (who is called Christ).  “When he comes, he will proclaim all things to us.”

They have now communicated and in deep places.

The woman went back into town and told the folks what had happened.    Notice the emotional process of their communication

Direction:  She moved toward them.  Perhaps for the first time in years.

Distance:    She had been too distant, coming for water at odd times, now she and they are able to communicate.

Anxiety:   Her encounter with Jesus lowered her anxiety.

When people see transformation in anyone, they’ll usually check it out.

That’s why we’re here today: to become receptive.  That involves: direction, distance and anxiety.   Prayer and Reflection; Fasting and self-regulation, Alms giving and reaching out to others; Inventory and Confession, attending Holy Eucharist are all ways of communication with God and the community.   It’s up to us to be empty.

Missionary in Africa is driving along the road when he saw a woman carrying a load of firewood on her head.  He stopped and offered her a ride to her village.  She smiled and accepted.  Driving along, he glanced in the rear view mirror and saw her sitting on the back of the truck with the load of wood on her head!

Do we accept the living water/the inner reality that gives life or not.   It’s up to us. 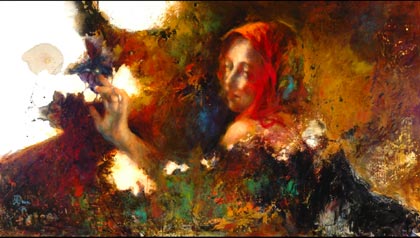