The Christian Missionary may preach the gospel to the poor naked heathen, but the spiritual heathen who populate Europe have as yet heard nothing of Christianity.

There is a necessity of getting out of movements — even movements that have seemed necessary and dear to us — when they lapsed into self—righteousness and self-betrayal, as movements seem almost invariably to do. People in movements too readily learn to deny to others the rights and privileges they demand for themselves. They too easily become unable to mean their their own language, as when a “peace movement” becomes violent. They often become too specialized, as if finally they cannot help taking refuge in pinhole vision of the institutional intellectuals. They almost always fail to be radical enough, dealing finally in effects rather than causes. Or they deal with single issues or single solutions, as if to assume themselves that they will not be radical enough. 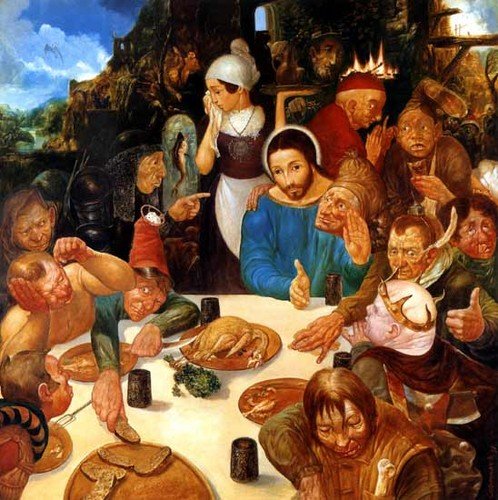 Wendell Berry the Kentucky farmer poet writes a radical truth: most movements simply move in circles slashing at leaves rather than roots, becoming the thing they abhor if not in content then by process. By middle-age this sober shadow edges over our vision if our eyes are open. We could succumb to bitterness or despair, as I am tempted in my mid-fifties. What to do? Sin, that alienation that goes to the core of what it means to be human is not something we have a choice about. I may turn over a new leaf (as I do almost daily) but the blotted ink of yesterday bleeds through.

Jesus seems to deal with this issue when he said some strange things like, “Do not resist evil” and “turn the other cheek”. Is he saying that we should allow the wicked to abuse the weak and helpless? No, but I do think he speaks of not adding to the totality of evil by meeting it on it’s own terms. He also tells those who follow him to pray without ceasing.

Thomas Hora says that prayer is an endeavor to behold what is real! Prayer then is not an agenda of wants and desires so much as an continual corrective to succumbing to alienation, self-deception and group-think so natural to us. Praying without ceasing is then the most important thing any Christian can do. Not only does praying call us to what is real but feeds the vital relationship with God. Sin may go to the core of the human but so does grace.

My half-century heart is saved from the sin of despair by prayer. I need it like oxygen. Grace is the mysterious energy released when we reach our limit and surrender. As the Big Book of Alcoholics Anonymous puts it you have “surrender to win” so praying is not optional and added on it is the very fabric of faith.